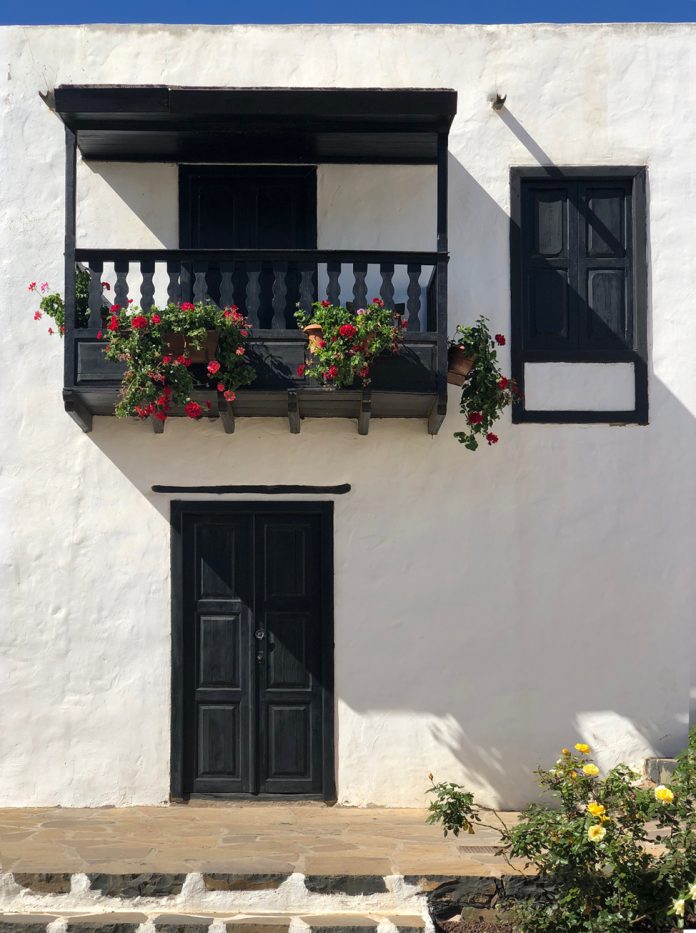 Former capital city of the island, Betancuria is a must-see in Fuerteventura. The village is named after Jean de Bethencourt, the French noble of Normand origins who invaded the island in 1402, and it’s one of the first cities to be built in the Canary Islands. Since then, and until the 19th century, Betancuria had been the capital city and the centre of administration of the island. Nowadays, the municipality has less than a thousand inhabitants, but it keeps the original charm and many representative places that you can visit to discover the history of the island at first hand.

Right before arriving at Betancuria through FTV-30 road, you find this viewpoint where you can admire the north of the island and the valley of Betancuria. The viewpoint is dominated by two 4,5-metre bronze statues, Guise and Ayose, that represent the kings who ruled Fuerteventura before its conquest in 1402. Guise and Ayose governed respectively the north and the south of the island, that was divided in two kingdoms – Maxorata and Jandía – by a wall that may have been situated in this place. The statues were sculpted by Emiliano Hernández.

Built in 1423, the convent was the abode of the Franciscans who brought Catholicism to the Canary Islands. It is located right at the entrance of the village of Betancuria, and we believe it’s a highly recommended place to visit, almost a must-see, for the beauty of its ruins and the landscape around. Few people stop there because it’s not well signposted, but if you go to Betancuria you really need to visit it, it’s wonderful. You find it right before entering the village from the north, there’s a parking place on the left side.  Always open, tickets are not necessary.

Located in the middle of Betancuria’s historic centre, the church was declared as a site of cultural interest (in Spain, places like this are listed as BIC, Bienes de Interés Cultural) by the Government of the Canary Islands in 2019. The construction of Santa María de Betancuria started in 1410 and it was commissioned by Jean de Bethencourt. Built in a French Gothic style, its purpose was to host the image of the Virgin Mary. It has 7 altarpieces and stands out from other religious constructions because of the quality of its building materials. After the conquest, Guise and Ayose surrendered and got baptized in this church. Destroyed in 1593 by the pirates, the cathedral got rebuilt, but it took a long time to complete the works.
Opening hours: from 10 am till 5 pm, Monday-Saturday.

If you like religious art, here you find a great collection of paintings, sculptures and religious vestments. The museum is located in an old dwelling of Canarian architecture, that was home to various religious authorities.
Opening hours: from 10 am till 6 pm, Monday-Saturday.
Address: C/ Alcalde Carmelo Silvera, 7. Betancuria.

This archaeological and ethnographic museum is a must-visit if you want to discover the heritage of the “Mahos”, the ancient inhabitants of the island. There are pictures, models of their habitats, pottery remains, rock engravings, besides information about the conquest and the hard life during those times. The experience is very enjoyable and the information is perfectly explained.
Opening hours: from 10 am till 5.30 pm, Monday-Sunday. Free entrance.
C/ Roberto Roldán, 21

This rural park extends over 90% of the municipality of Betancuria. The park has also been declared as a special protection area for wild birds (Zepa, Zona de Especial Protección para las Aves).
In this place of exceptional scientific and natural interest you also find Macizo de Betancuria – a basal complex formed by volcanic material -, and the Natural Monument of Ajuy. The beautiful landscape is characterized by ravines and hills, and it is home to a variety of animals and plants, with a small pine forest even. At the south of Vega del Rio Palmas, there’s a ravine that deserves a special mention for its peculiar landscape: Barranco de las Peñitas. A path runs along it and visitors can follow it to admire the peculiar natural environment of the ravine, where there’s one of the few dams of Fuerteventura and the nice Ermita de la Virgen de la Peña, a tiny little church on the mountain. Comfortable shoes recommended. Especially recommended for nature lovers.

Moving towards South from Betancuria, you end up in Vega del Rio Palmas, a small village – one of the less deforested of the island – where you can walk around till you reach Ermita de Nuestra Señora de la Peña. Inside of this tiny church there’s a very important sculpture for local people: it’s a Holy Mary – Virgen de la Peña –, the patron saint of the island. Every year in September, a colourful, enjoyable and exciting procession takes place to honour the Virgin.

So, you know now: if you come and visit Fuerteventura, you really need to go to Betancuria. What better way to know the history of the island at first hand, apart from enjoying wonderful landscapes and great people?