Home Articles The utopia manrique drew on the 29th Parallel

The restoration of old dwellings –carried out with the wisdom of someone who knows where the winds come from–, against the obsession of building more rooms and more floors and more heights and more profits.
The immaculate purity of Nature, against the habit of dumping the wastes of progress where they cannot be seen.
The pride of the peasant, of the land covered in karst and of the jareas –the salty and dried fishes hung out in the sun–, against the inferiority complex of a suffering island, of a land burnt by the sun and the hunger.
César Manrique wanted to pass his perception of Lanzarote on to everybody. He wanted to teach how to see beauty in the basalt to those who just looked askance at it and saw a cutting edge. That tardy boy from the Chinijo archipelago, who was controversial and fulminant, and studied what he wanted at the San Fernando Fine Arts Academy, also wanted to turn the most oriental island of the Canaries in an independent republic of utopia.

THE UNKNOWN MANRIQUE’S WORK IN ARRECIFE

It’s difficult to see any trace of César Manrique in a city with the structural problems that Lanzarote’s capital city has: the old own shrunk by speculation, the streets traced by the urgent and razing hand of developmentalism, a public space in an awful state because of the present institutional block and the heritage of corrupt city governments…
In the building of the present National Distance Education University (UNED), without a sign informing it, some of the first César’s paintings can be contemplated. They are the murals he created in 1950 for the cafeteria and the restaurant of the Parador de Turismo de Arrecife, an old state-run tourist hotel now reconverted into lecture rooms. They portray allegories of the wind, the fishing and the grape harvest, embodied by granitic peasants who look as if they come out of a legend or of Pablo Picasso’s mind. Some years before, he had already painted murals for the Casino of Arrecife, now Casa de la Cultura Agustín de la Hoz.
Over the years he painted murals in many places in Madrid (the legendary Cine Princesa, Barajas airport, Hotel Fénix, the offices in Banco Guipuzcoano…) and, of course, in his native island: the one he painted in the 60’s that dominates the main hall of the Casino Club Náutico in Arrecife; the one in El Risco restaurant in Famara, which keeps on paying tribute to those fishermen who, in years gone by, used to climb the cliff daily to sell their fresh fish; the very special one, in volcanic stone, in the religious building of the Ermita de Máguez, that can only be seen during mass time; the one in the foundation that carries his name in Tahiche, where he built his studio in between lava bubbles…
But let’s go back to Arrecife. Here he participated in the decoration of the Parador, in the disposition of the benches, flower gardens and decorative elements of Las Palmas’ square and in the design of the Hospital Insular gardens, that had to be prepared for the visit of dictator Francisco Franco. He also designed the children playground in Parque Ramírez Cerdá, which is still standing, but its stone is damaged, the pond is empty, the tesserae are broken, the plants are ordinary and close to some modern swings. His adventure in the Centro Polidimensional El Almacén (or how to restructure a traditional house into a place for avant-garde and experimentation) is worth a chapter on its own, whose reading has to start in the space itself, which is now a centre of cultural innovation of the Cabildo de Lanzarote.

As early as 1953 his works were bought by collectors who wanted to add a Manrique artwork to their collection of Paul Klee’s. The career of the artist from Lanzarote is meteoric and renaissance-oriented. His studio in Madrid is a constant celebration of art and social gathering frequented by diplomats and artists as Jorge Oteiza. On 25th of June of 1965 he left New York to spend summer holidays at home.
This is when the talks with a group of people in his same wave length produce results such as the Centres for Art, Culture and Tourism (Jameos del Agua in a traditional space for excursions and barbecues, Mirador del Río instead of an ancient military base, the Monument to the Peasant, restaurant El Diablo in Timanfaya, the International Contemporary Art Museum in a castle of centuries ago, Jardín de Cactus in an old quarry converted into a dumping site…).
César Manrique is the artistic director of these public works that came to be a fascinating example of integration between art and nature. They are brimming with ecology and love for the earth, two common positions he shares with people like master Jesús Soto –designer of Cueva de los Verdes and Ruta de los Volcanes–, foreman Luis Morales or artist Ildefonso Aguilar. They are just some of the many people who participate in a collective project that pointed out the value of the special landscape of Lanzarote and that wanted to guide the island towards a sustainable and respectful economy, more connected with ecology, artistic avant-garde and science, rather than with events, paninis and the considerable success of conventional tourism.
His painting –first figurative, later abstract and materic–, his wind toys spread on the roundabouts of the island, the omnipresent imagotype he drew for the Lanzarote Centre for Tourism, the Timanfaya devil… it’s difficult to be in Lanzarote and not to see César and a utopia in its lethargic state in every corner. 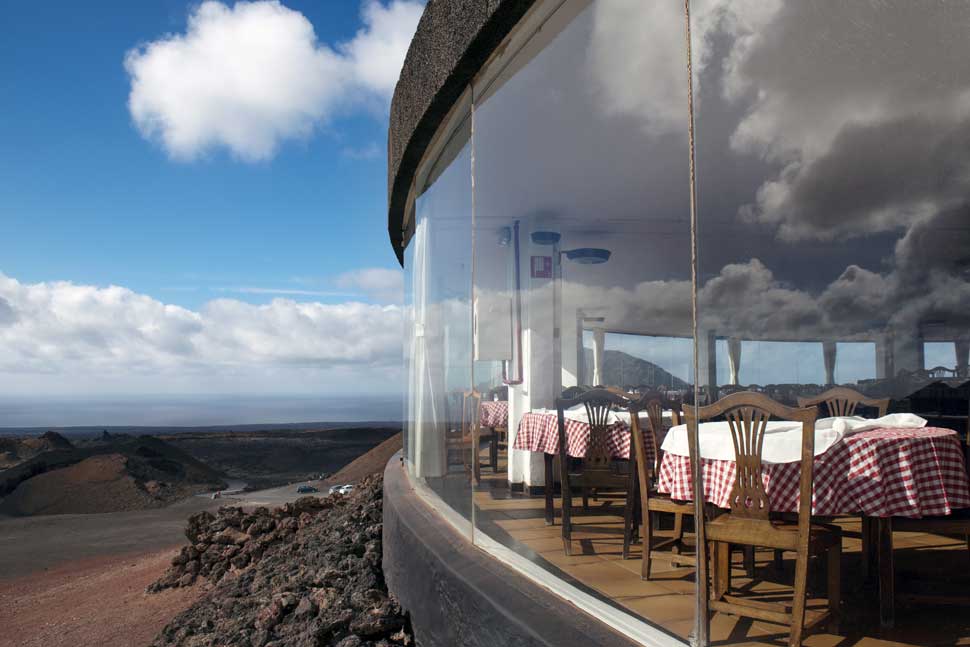