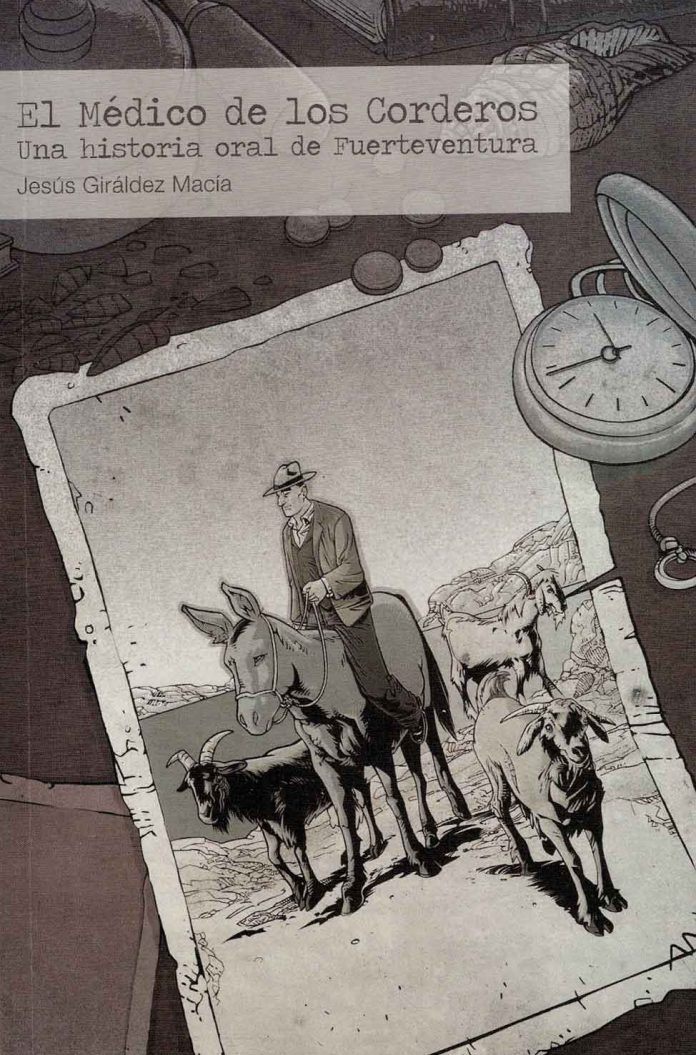 We heard, by chance, about the existence in Fuerteventura of a character still in the memory of some elderly people. He was known as The Lambs’ Doctor, though his name was, actually, Agustín Alfonso Ferrer. Coming from the south of Tenerife, the date he reached Fuerteventura is still uncertain, probably around the year 1900. The Lamb – as he was popularly known- was born in 1860, and he died in 1946. From the first interviews we made to some of his descendants, we found out a singular person who, according to his relatives, must have left his mark on the majorera society. We only needed to have it confirmed.

Facts, in this case, went far beyond expectations. The more people who met him we interviewed (all of them between 75 and 103 years old) the more aware we became about the importance of this character in Fuerteventura during the first half of the XX century. Otherwise, how could those people remember so accurately the conversations, remedies, anecdotes and even the peculiar lexicon of a man they got to know when they were only children? The following features of this character can be extracted from those testimonies:
The reasons that brought him to Fuerteventura are unknown, and he was most concealing of his previous life in Tenerife. We know, however, he had got married there, and that, most probably, he acquired some medical knowledge. His nickname, according to some informants, was due to the fact that he arrived in Fuerteventura in a ship with some lambs, and his first activity in the Island was the sale of those animals. After settling down inland he became known as a doctor. For this reason the town of Betancuria came to the decision of giving him a communal land in «El Barranco de El Jurado», adjacent to that of Ajuy. It’s a very remote place where he built his house and a lime kiln, and where he repaired some ditches that took its water from the ravine and some nearby springs. The Lamb baptized that place as «El Escorial».

Permanently living there, Don Agustín practised popular medicine all over the Island. People went to fetch him there on a camel or donkey, from everywhere, far though it might be. When he moved to some village the rumour spread very quickly, and people from nearby villages went to fetch him so he could visit those patients. He used to stay at his patients’ homes until their health improved. Having a special gift, he could recognize the people for whom his medicine wouldn’t be of any use, and he advised their moving to Las Palmas or, in the worst of cases, he warned about the tragic end. His medical practice was based on natural remedies, from the use of herbs or manure to practising bleedings. Some other times, during his first years of practice, He made some prescriptions so that his patients could have some preparations in the existing precarious chemists. Everything seems to show that with the arrival of an official doctor his activity became clandestine, as otherwise he could have been sued. He was admired by plain people who considered him as their proverbial saviour. The payment to his services was, most times, food. He lived with a woman from Tesejerague, with whom she had a daughter he temporarily sent to Tenerife. Probably because of this «inappropriate» situation which was against the catholic precepts he was buried outside the town of Betancuria when he died being 85.

To better understand the mark he left, let’s show a summary of some of the testimonies that, apart from describing this character, draw a time of abandonment and poverty:

«We always knew him as The Lamb, The Lambs’ Doctor. He was the only doctor we had here, I didn’t know any other doctor. I don’t know if he was so called because he was a witch doctor, if this was his actual surname or if it was a nickname;

Don Agustín El Cordero was just Don Agustín El Cordero. He didn’t charge, people just gave him what they estimated. He cured my pneumonia just by bleeding it. He always said, from the first symptoms, «this is suspicious». He took his cupping glasses, a chunk candle in a glass and he placed it on one side, and then he placed his cupping glasses where I felt the pain. He rubbed a little alcohol there, he dried it and he placed a coin under the candle – at those times it was a round black coin- and on top of it he placed the glass. If you were suffering from pneumonia it all became black and he immediately grabbed the razor blade and bled it. Then he prescribed water from clin herb, and let’s drink it! Doctors like that are needed nowadays, not the current ones. Poor people called him and he went to help them».

«When he came to Corralejo he stayed at the best room the neighbours had so he could sleep well. He was very popular, he was a witch doctor but a natural one. His remedies were natural herbs, goat milk and things like this»

«He cured my heart. He was living in El Escorial, somewhere near Ahui. Don Agustín, The Lambs’ doctor. People went to fetch him anywhere, and from everywhere, night and day. He had a white donkey, as big as a mare, but I don’t remember her name. He said: «Heavens, if The Lamb doesn’t cure you, then you are lost». He was a strong man, he drank a lot too. He was from Tenerife and came here, I don’t know why, and I don’t think anybody knows it. Doctors didn’t like him, but the people did! Oh, without Don Agustín there was nothing! Don Agustín prescribed you a cup of tea, and the cup of tea cured you. His kindness was beautiful. He was a very polite man. He was never sold drugs, just herbs, this is true: Mallow, urraja, verbena, la conservilla (salvia aegyptiaca), el pasote (chenopodium ambrosioides), the herb of grace. He was the best doctor we’ve ever had. If he were here a lot of people would get cured. At home we still say «as a true doctor……..The Lambs’ Doctor».