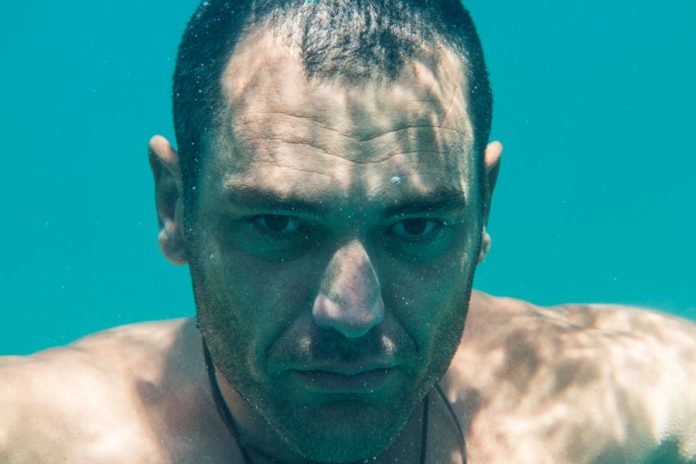 We have met Alain Hernández (Barcelona 1975) , the star of Solo, the new film by Hugo Stuven, narrating the experience lived by Álvaro Vizcaíno Albertos, from Madrid, when he fell off a cliff in the Western coast of Fuerteventura and he managed to survive, though with a battered body when rescued 48 later.

We met at the hotel, where the whole film crew was. We were received by Álvaro himself, with a peaceful and quiet mood that makes you wonder if this won’t be the consequence of that terrible near-death experience that he lived two years ago. His eyes transmit the peace, as he himself says, found at one point that fatal day, submerged under the waves. A crucial moment when his mind decided to say good-bye to life, thankful, and who knows if this is what really saved him, «what a paradox!». The stillness of a moment that made his body get rid of the tension of his broken bones and soul and emerge from the water, breathing out not just air but also life.

Álvaro decided to go surfing to that area that one day, like any other day in the island. Being on «La Pared» his feet missed the ground, which disappeared like a trap towards the cliff. In a matter of seconds he was hanging on the rocks with the only strength of his arms holding him until he couldn’t stand it longer and he decided to let himself fall the moment the wave covered the volcanic soil of that part of the coast. Not even that mattress of water was deep enough and he broke his pelvis, his hip and his arm. The pain of his broken legs caused him seizures and fainting fits under the sea.

His story, Solo, transmitted by word of mouth in this little island, already made us exclaim «it’s a film story». And so will it be. In a dinner with friends where Stuven was, he narrated his experience, and the film director was flabbergasted and captivated by his vitality, this man, his strength, his life. A phone call, a one to one conversation, a meeting with a scriptwriter and one year later with the producer, Miramar Media Entertainment leading; here is a whole team of cinema professionals ready to tell a real but incredible story.

«What is incredible is that we have taken such short time to set in motion this film», Álvaro states, who could never think that his life, or at least a piece of it, could ever be seen in the big screen. He thinks it has been pure chance, again, «that great paradox that life turns out to be».

Alain Hernández arrived some minutes later, not to interrupt the narration of his character. The colour of his face and his clothes let us know that the few days the has been on the island have been enough to start out in surf as a rehearsal for his role. «I am starting out in surf, climbing and diving at record-breaking speed. Physical training is important not just because the three sports have been moments in history, but because they prepare you mentally. Now I am ready for Jesús Calleja to call me and take part in one of his adventures», Hernández kids.

Alain Hernández (Mar de plástico, Palmeras en la Nieve), who this year released Plan de Fuga, with Luis Tosar, and still «Que baje Dios y lo vea» is to be released, with Darra Elejalde, is at one of the best moments of his career as an actor, which, as he himself has said on other occasions, «it`’s a hobby that I let slip».

A hobby that he carries out methodically and with discipline in every aspect related to the introspective of his character, something you can see while he is training on his surf board. «Learning to flounder in the water and to paddle, making it seem as real as possible, is essential, although we have stuntmen for certain scenes», he says. The intensity of the island hasn’t gone unnoticed to Alain either, who states: «it has an energy that traps you, I don’t know if it is its wilderness, but time seems to pass by in another way: I’ve been here two and a half weeks and it looks like a whole year». And this is because the time in the island charms you, just like those «wonderful nooks, precious and huge beaches, passing through the dunes, which seem to belong to another planet, and the roads, which seem to be taken from Afghanistan, and which I’m sure that soon will take part in another shooting», he reveals.

Alain is close and smiling, and he feels thankful for the role that he considers «to be a present». It’s the first time he finds himself playing the role of a character based on real facts, and also as almost the only actor of the film, Solo. «When I read the script, the first feeling I had was big responsibility, having to embody a real person, it was the first time I was going to experience this and this made me feel a great respect». You can notice in his looks that complicity existing between actor and character. «Álvaro has been and is being key to create this character. I don’t want to imitate because still this is fiction, but there are many moments in the film that really happened as they are depicted and we just transfer what happened to him, what he thought and felt. So, getting to know him and sharing this with him is essential to prepare the role».

Five weeks of shooting await both of them, and there will also be local people working, which «will always be interesting and attractive for the people in Fuerteventura», literally said by Hernández. Although it doesn’t depend on him, he is for the celebration of a special film screening here, and most of all he hopes «people like the story and how the island is depicted and showed in the film».

We’ll have to wait to see the final outcome, Solo which doesn’t have a release date. Meanwhile, we have the story, the experience and the marvellous paradox of life.