This month of November, a new water sports High Performance Centre will open in the Municipal Nautical School in Corralejo; it’s a new sport project, an initiative by Onexe Club and thanks to the collaboration of the Town hall in La Oliva, which offers a more specific training to the most outstanding athletes in the club wanting to take part in high-level competitions, thus enhancing the potential of the water sport teams in Fuerteventura.

ONEXE, A DREAM COME TRUE THAT CULMINATES WITH THE CREATION OF A WATER SPORT HIGH PERFORMANCE CENTRE IN CORRALEJO

The Onexe Club, located in Corralejo Harbour, with head-offices in the Municipal Nautical School, has supported sea water sports since its early stages in 2012, thus promoting the sport culture among the youngest, always respecting the environment and the harmony with this wonderful landscape surrounding us. And this is because our coastline is the perfect stage for the practice of these sports, with the precious Lobos Island always in the horizon.
Onexe club was, and is, an initiative by Nayra Martínez (manager of the centre, a Physical Education graduate with a major in Sail, a level 2 surf instructor and level 1 in canoeing), who has always dreamt of the creation of this Water Sports High Performance Centre that will be inaugurated this current month in Corralejo with the incorporation of new high performance instructors.

«When I started this project I was aware of its potential and I dreamt of setting up, one day, a High Performance Centre. Life has surrounded me of great athletes and friends and thanks to them my dream is becoming true. I won’t forget this isn’t just a High Performance Centre, but a leisure family centre for all ages and levels. These children’s parents, for example, also take part in this projects. Getting one mother stand up on a SUP board thinking she would never be able to do that (apart from being crazy) and see how that mother keeps coming the whole year gives me the same satisfaction as seeing the evolution of a child who has been classified to go to the world championship…. We just offer possibilities for those young athletes who want to promote themselves at an international level.» Nayra Martínez

Onexe has been offering a wide range of activities (Sail, Windsurf, Canoeing and Stand Up Paddle) from the very beginning. They’ll soon include Surf, Bodyboard and Rescue and Lifesaving too. At present, they have High Performance technicians, like Esperanza Barreras (Sail pre-Olympic and current SUP Sprint Spanish Champion), Mauricio Kaminski (Canoeing Olympic), Eunate Aguirre (Bodyboard World Champion), Javi Cozar (Phycical trainer) and renowned athletes such as Iballa Ruano, Sonni Hönscheid, Stephan Etienne, Nicole Boronat and Pablo Valencia.
In these six years of experience Onexe has been committed to promoting water sports, six years training the team of Fuerteventura, which has got great results in the last Spain Championship, carried out in September in Baiona (Galicia), achieving 15 medals among the different categories.
The Club, which went there with great excitement after having worked so hard, with more than thirty «majorero» athletes, was the most outstanding team at a national level, with 4 Spanish champions.
Benjamín Moreham (17 years old) is an example of their work in the last 6 years, as he started his sport career in Onexe and has been able to classify for the next ISA World Championship (International Surfing Association), which will take place in China next November.
At the same time, Iballa Ruano ,professional athlete and a ten-time World Windsurf Champion and Surf instructor level 2 and the most internationally awarded athlete in the Canary Islands, also a part of this great Onexe family, managed to become a champion in USA in the first event of the World SUP Circuit (APP World Tour), thus becoming the first Spanish athlete to have an international SUP Surf award.

«WE LIVE SURROUNDED BY THE SEA, AND THE INHABITANTS OF THE ISLAND AREN’T REALLY AWARE OF THE EXCELLENT SETTING AND THE CONDITIONS OF THE WIND AND WAVES IN THESE ISLANDS. FUERTEVENTURA, AND MAINLY CORRALEJO, MEETS THE PERFECT REQUIREMENTS TO FORGE A TEAM WITH A BRILLIANT FUTURE AND I’M POSITIVE THAT SOONER RATHER THAN LATER WE’LL GET GREAT RESULTS.» IBALLA RUANO.

«In Fuerteventura we have the perfect conditions to train all year round. The high performance centre is essential, and a great opportunity for current and future professionals in the sport of the Stand Up Paddle, to improve in this sport in a little time». Sonni Hönscheid.

This passion, this perseverance, these great athletes in the island who have been training with lots of excitement in Onexe are the engine that has got Óscar Ruiz (CAFD graduate, National manager and technician of the Surf Spanish Federation , trainer of sport technicians and high performance athletes), attracted by the promotion of the Canary Islands team and the potential of the centre conditions, has decided to take part in this High Performance Centre as a Technical Director.

«I’ve already come to Fuerteventura for some years and there are little spots in this world meeting these perfect conditions and such great potential to spread sea water sports.» Óscar Ruiz

The target Onexe has always pursued is the Municipal Nautical School to become an integral centre where there will be several action lines, such as the promotion of grass-roots sports, leisure and free time, High performance technical sport, trainers training and adapted sport for people with any kind of disability.

This Water Sports High Performance Centre debuts with the first gathering in the Island of the SUP Surf and Paddle Board National Teams with the aim of training for the China World Championship.
Besides, last July 2018 they were working with the Association Play and Train in Intensive Adapted Surf Days, where over 40 people with different disabilities have already taken part. They started to work with resident children and adults to include them in different water sports.
The energy by Onexe to spread their passion during these last six years has taken them to organize several outstanding sport events, coming to gain this year the deserved prestige by the Spanish Surf Federation that has entrusted them the organization of two SUP Surf and Beach Race Spanish Championships, which will be celebrated from 6th to 9th December together with Fuerteventura SUP Challenge and Rescue and Lifesaving

Starboard and Severne Sails, the two leader Stand UP Paddle and Windsurf brands, visited the installations of the Nautical School in Corralejo to give their agreement to the current Test Centre that will have the latest technology in Stand Paddle and Windsurf equipment.
Representing Starboard, the Spanish Ian Varderi and representing Severne Sails, the owner and creator of the brand, the Australian Ben Severne, popped in the installations to meet the new Fuerteventura team.

From Macaronesia we feel proud to have such great athletes in a sparsely populated island but surrounded by a spectacular sea, which allows these youngsters to gather prizes and evolve in their favourite sports. Thanks to Onexe for not ignoring their dreams and long life to this project, the Water Sports High Performance Centre in Corralejo.
The club doors are open for all those people, young and adults, wanting to learn and get better in any of the sports they offer. 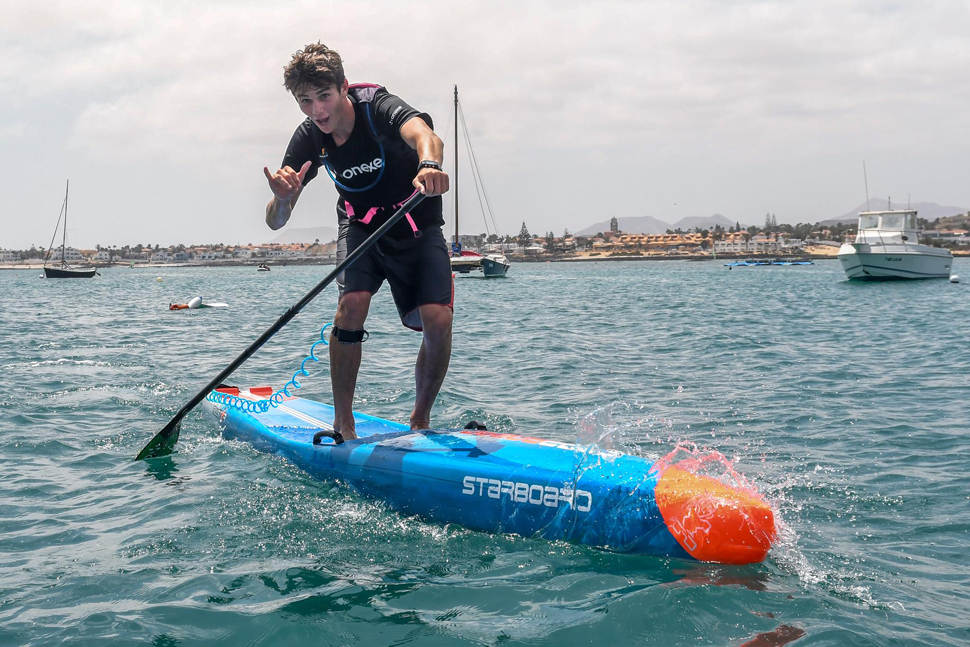 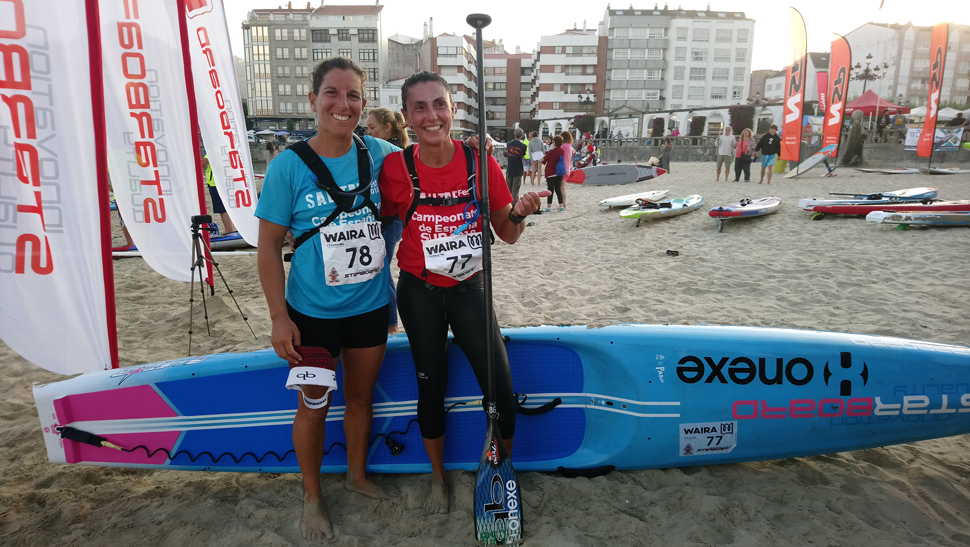 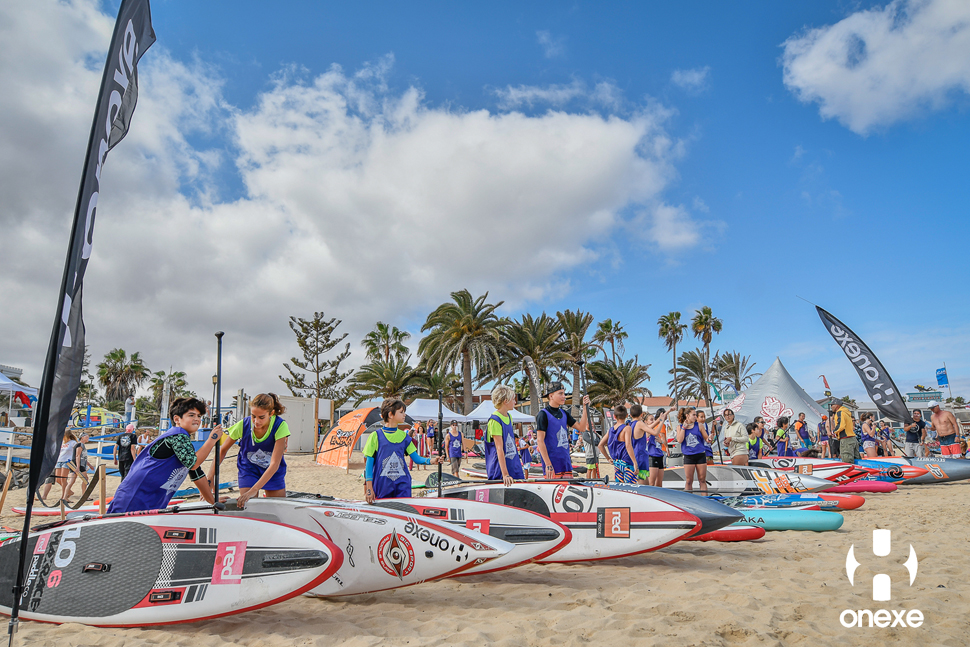