Home What to see Jandía, the wonder of the south 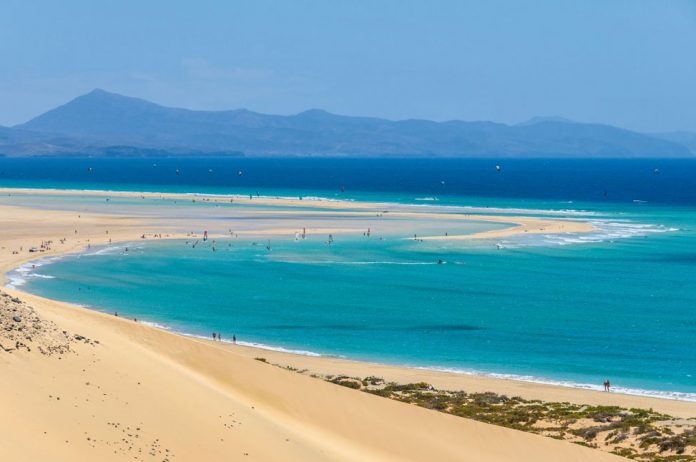 In the South of Fuerteventura, from its isthmus till where the land ends and the eye meets the ocean, the island hides one of the most enchanting natural treasures in Europe: the Natural Park of Jandía. Declared in 1987 as a protected area, the Park offers a wild, imposing and almost intact landscape which is home to some outstanding natural species, and offers views and sceneries that leave visitors speechless.

THE BEAUTY OF THE LANDSCAPE

The landscape in Jandía has sharp contrasts: from the dark heights of the volcanoes in the massif, to huge ravines and vast plains that turn into endless beaches slipping into the sea.

With their fine golden sand and the calm, turquoise and almost transparent waters, the beaches of Sotavento are a picture-perfect paradise that extends for almost 10 km of coastline. Playa de La Barca, Risco del Paso and Mal Nombre, apart from being wonderful beaches, are some of the best spots on the island and the archipelago where you can practice water sports, such as windsurfing and kitesurfing.

On the other coast, the wild and roaring ocean pounding on the coast of Barlovento makes it almost impossible to go into the sea. Even so, simply admiring the view is worth the hassle of the walk. It is hard to imagine there’s such a pure and wild area of almost 15 thousands hectares in Europe.

A UNIQUE NATURAL BEAUTY IN THE WORLD

An area of virgin nature such as this one is home to countless animals and plant species. Cardón de Jandía, for instance, is an endemic cactus-like shrub which can only be found in Jandía, as its name suggests. The specimens of cardón and tabaiba (Euphorbia regis-jubae) that live here are especially outstanding for their size, which can be larger than in any other part of all the Canary Islands.

As for the fauna, Jandía is home to almost thirty nesting birds, some reptiles such as the lisa majorera – an endemic skink -, and more than ten species of mammals.
Moving towards the coast, the sea houses a huge number of fishes, different species of turtles and a wide range of cetaceans, such as pilot whales and sperm whales, that live harmoniously together with other animals in the waters of Jandía.

THE PEAK OF FUERTEVENTURA

Another treasure in Jandía is the Pico de la Zarza, that with its 807 metres of height is the highest point of the whole island.

The hike to the peak takes roughly a couple of hours to complete and it is one of the most interesting activities the island offers. Once up there, the view over the wild and endless beach of Cofete is so amazing that it would be definitely worth the effort: fourteen km of clear sand beach flanked by high mountains, the trace of the volcanic origins of Fuerteventura.

Moreover, the landscape around the highest mountain boasts the greater representation of endemic flora of the island, and also traces of the ancient thermophyllous woods that some time in millions of years ago were part of the landscape in Fuerteventura.

Nonetheless, in the Natural Park of Jandía not everything is merely nature. In the southernmost point of the island, close to the lighthouse that indicates where the land ends, there is El Puertito de la Cruz, a small fishing village out of every other trace of civilization. If while visiting this wild and virgin place of Fuerteventura you get hungry, there is nothing better than to stop in one of the restaurants of this tiny village to try a fish soup. This one, together with the fish freshly caught by local fishermen, the gofio escaldao and the potatoes with mojo, is one of the most representative recipes of the food tradition of Fuerteventura. Our excursion will then finish with a happy heart and a full belly.