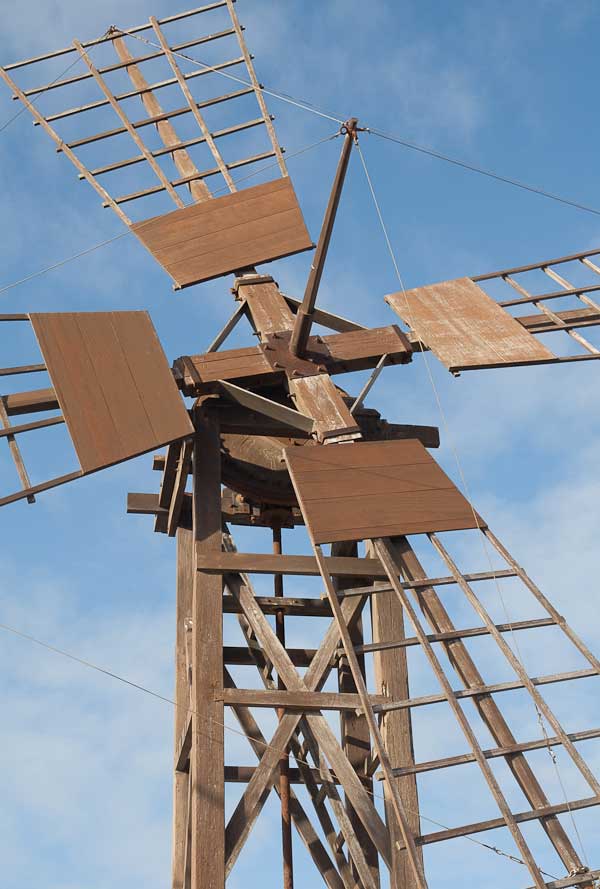 Traditional wind mills are spread all over the majorera geography, as dumb witnesses of time passing by. Like posts that clung to the ground are unwilling to be forgotten, by looking at them we go back to an old Fuerteventura, not so far away in history but linked to a life style where cereal farming was the population’s main way or earning their living.

Due to their ethnographic and historic value, the last bastions of milling the grain just before mechanic procedures came into the island, these centenarian buildings have been recognized as heritage of cultural interest by the «Ley de Patrimonio Histórico de Canarias», which through the «Decreto del Gobierno regional (162/1994, de 29 de Julio) has classed 23 mills in the island as monuments.

This acknowledgment entails not just the protection of mills in Fuerteventura, but also the responsibility of the inter-island council to safeguard their recovery and preservation. This is why lately the inter-island council has been incorporating to their heritage up to 14 out of these 23 mills, some other times supporting just the building restoration —as it happened lately with the mill from Durazno, or that from La Asomada —although they keep the ownership of their heirs and owners.

Three of the mills in the island are being used as active displays of the traditional majorera culture, as they are integrated in the «Red Insular de Museos». On the one hand we have the «Molino de Antigua» and the «Molino de Tiscamanita», which work as independent museums; That of Tiscamanita shows visitors the milling procedure and manufacture of «gofio». On the other hand, the same purpose has the «Molina de Tefía», showing one of the various aspects of the majoreros’ old way of life. This is also displayed in the eco-museum in La Alcogida.

Wind mills started to be built in Fuerteventura at the end of the XVIII. century and beginning of the XIX, especially in the centre and north, in coherence with the population’s needs in those areas, where the wind was continuous and its flat orography helped the construction of these buildings.

Wind mills meant enormous advantages in the milling of the different kinds of grain, although their introduction and spread didn’t cause leaving older ways of milling, like hand mills —already used by mahos with a primitive structure— or «la tahona», pulled by draft animals.

We must distinguish between «molino» and «molina».

«Molino» (The wind mill or male mill) is a building on a circular plan, conical, made of stone, lime and clay, crowned by a wooden helmet that spins by means of a steering wheel that orientates the sails towards the direction of the wind. It used to count on three floors, though some of them only have two, and on four or six wooden and canvas sails.
«Molina» (female mill), however, is more modern —devised by Isidoro Ortega de la Palma, in the XIX century— and has the advantage of gathering all the milling activities and grain handling on a single floor, thus avoiding the miller the hard task of going up and down the different floors all the time.
Its main feature is the outstanding difference between the machinery and the building, which has allowed «Molina» owners, regarding needs and buying and selling reasons, moving the machinery to different locations, just needing to build a new quadrangular plan in the new location. 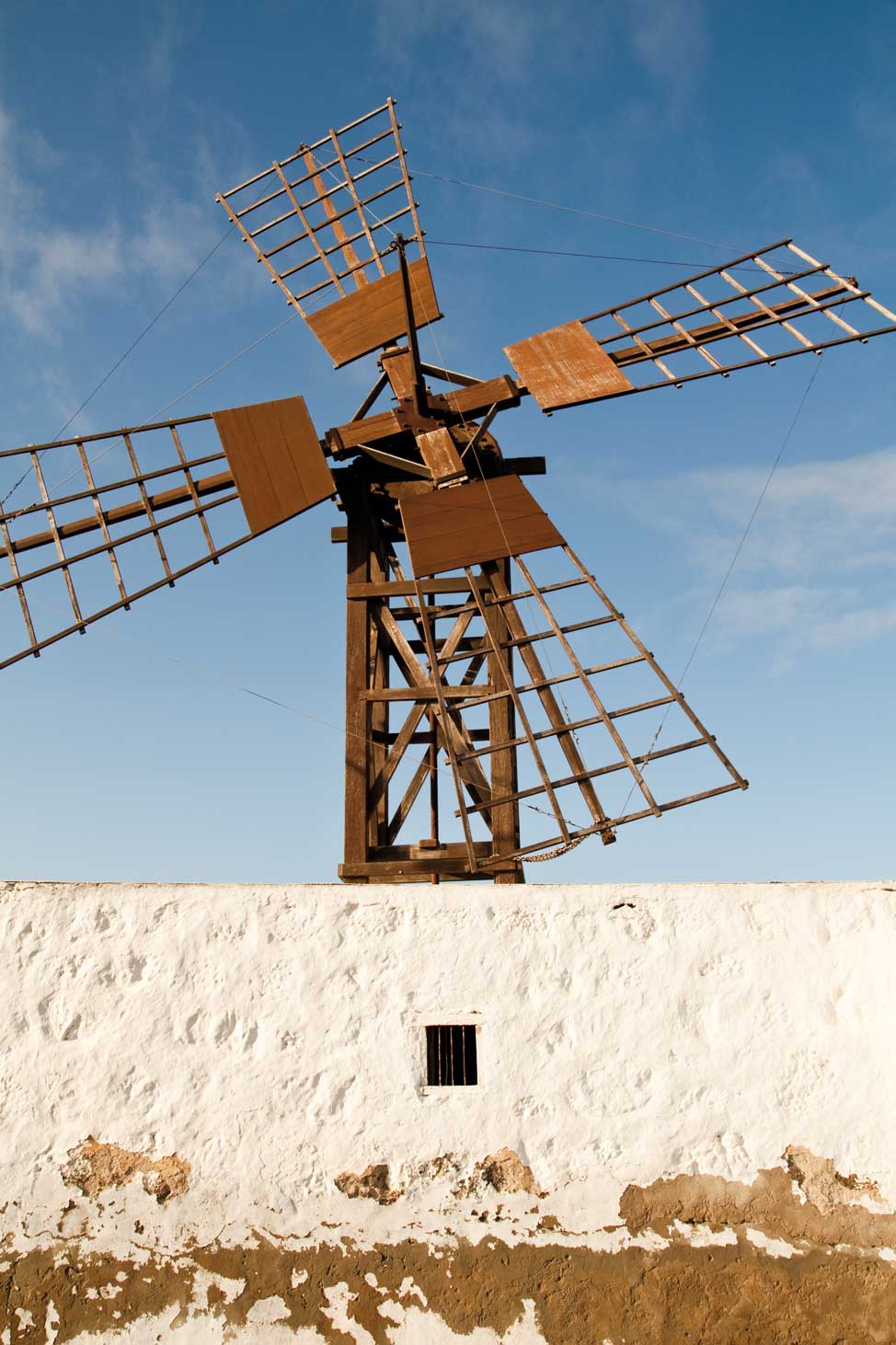 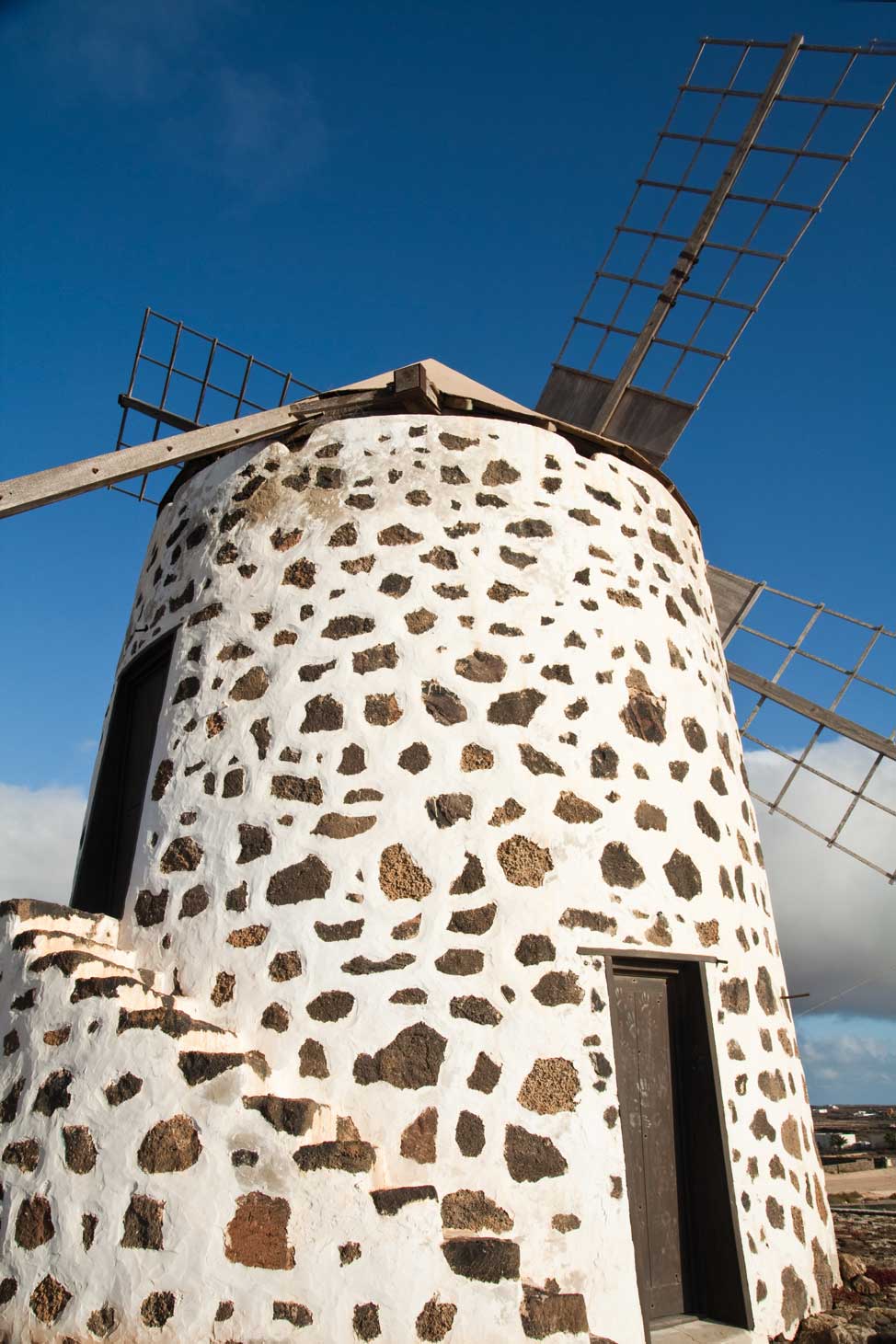