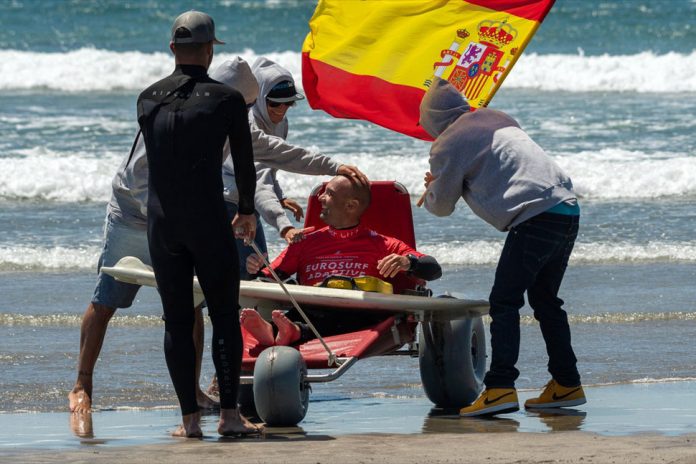 Marcos Tapia was born in Madrid, 44 years ago, but at the age of 2 he moved, with his parents, to Gran Canaria. In the islands, he discovered the sea and surf. When he was 18, he returned to Madrid. He worked as a helicopter technician until a motorbike accident damaged his spinal cord and he became a disabled person. It’s been 16 years since then. One day he could go back to The islands, resumed surf and became a top athlete in the category of adaptive surf. He has become an adaptive surf Spanish champion. He’s got the international gold of Adaptive Surf Open, which took place at the same time as the European Championship, where he won the bronze.

«Barriers exist, but my target is to break them»

How did you get to the world of surf?
When I was very young. Being six or seven my parents gave me a bodyboard and I practised until the age of twenty-two. Then I left it. I resumed it eleven years ago, after the accident, when my brother came and settled in Fuerteventura. I started to come to the island regularly to practise adaptive surf. Before that I used to practise scuba diving, tennis, paddle, ski, gliding…

Why did you decide to resume surf after the accident?
I always had a recurring dream which was catching waves. I used to travel to Las Palmas and when the day broke, something always happened: the car broke down, I was waiting for a friend who was taking long to arrive… the sun was setting and then I couldn’t surf. I used to have this obsessive dream of wanting to catch waves. Some friends recommended resuming surf on the bodyboard. I tried but I couldn’t. I didn’t live in the islands either and I couldn’t have the chance of trial and error practice. So, once I knew that in Play and Train they taught Adaptive Surf and I dared to do it. The day I tried it I thought: «you can do this!» I contacted them one second time and the third day I was already making my own board.

What is the situation like for the practice of adaptive surf in Fuerteventura?
Some spots are better than others. Not all the beaches are fitted out as such and the ones that are, are for swimmers. In other beaches, we have to look for some tricks, always with the help of Eva, my girlfriend, or of some other people who help me to get in. Some beaches aren’t made of sand and we must cross another barrier, which are the rocks. Some of them are accessible, though there is a slope that leaves you in the middle of the beach and you cannot do anything else beyond it, unless there is an adapted vehicle for disabled people and life-saving services, but they only work in the high season. I call for La Oliva town hall so Piedra Playa be made fully accessible for people with reduced mobility. It’s a highly suitable beach for learning.

Right now you and your partner, Eva, are working on the realisation of the Alohanesia proyect, what does it consist of?
It’s a multi-sport programme. It’ll have a physical place in La Oliva for the rehabilitation of disabled people where all the sports I can practise will be offered: scuba diving, paddle surf, kitesurf and then yoga, for example, aerial yoga. We want to spread that it’s very beneficial for people with any physical dysfunction.

What did becoming a Spanish champion of adaptive surf mean to you?
It was a dream I wanted to make true already four years ago. However, destiny didn’t let me get it. It has been harder than people believe. People haven’t seen the dark side of five operations and the year I’ve been in absolute rest and I haven’t been able to practise any sports. I’ve got to the Spain Championship not fit enough, just one month of training, and during that month I suffered a thrombosis and a haemorrhage in the leg. That month was even complicated. The happiness was bigger than I could expect, as I had found many obstacles in my way.

What will your next sport appointment be?
Now there will be a series of championships. Important events such as the world championship in December. Among them, there are championships of associations and foundations. When I won the Spain Championship I made sure I would take part in the European one, some weeks ago in Viena Castello, in Portugal, where there were two competitions. One of them was an Open, with people from all over the world, not just European, and where I won the gold medal, and then The European championship, just for Europeans, where I won the bronze one.

What challenges does Marcos Tapia have to fulfil yet?
The world championship. Adaptive surf is becoming a Paralympic modality. Winning the Paralympics would be a dream, although there isn’t a deadline to know when it’ll become a Paralympic. I also have other sport targets, like practising other adaptive sports such as Kitesurf, practising it on my own and being able to teach it. And also other sports I think I can’t do and I can really manage to.

Does adaptive surf get enough support?
I doesn’t. I have no sponsor, I have to pay for my own expenses and they are great. The circuit is expanding in scope and I’d like to take part in all the events, but I’d like to find someone who could sponsor me, not to miss any events.

Are there any barriers for Marcos?
There are, but my target is to break them, and with this purpose I use my will power and attitude. Reaching a goal is a great reward. Many people think it’s really difficult, that you must be a different kettle of fish but your mustn’t. To me, there are other bigger barriers, like sweeping or cooking in this situation, as we do it and we don’t get any rewards. 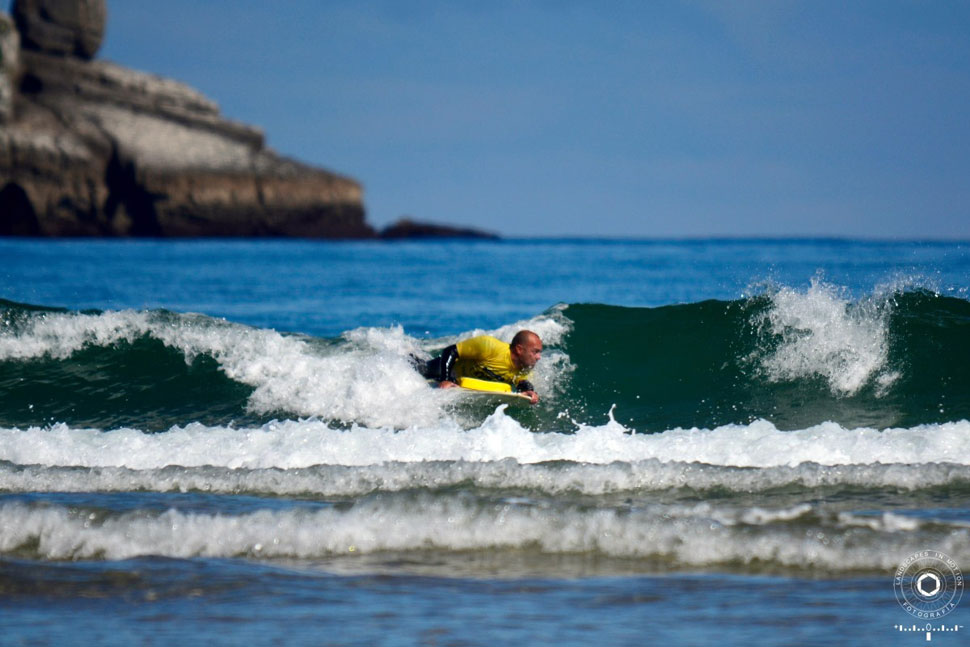