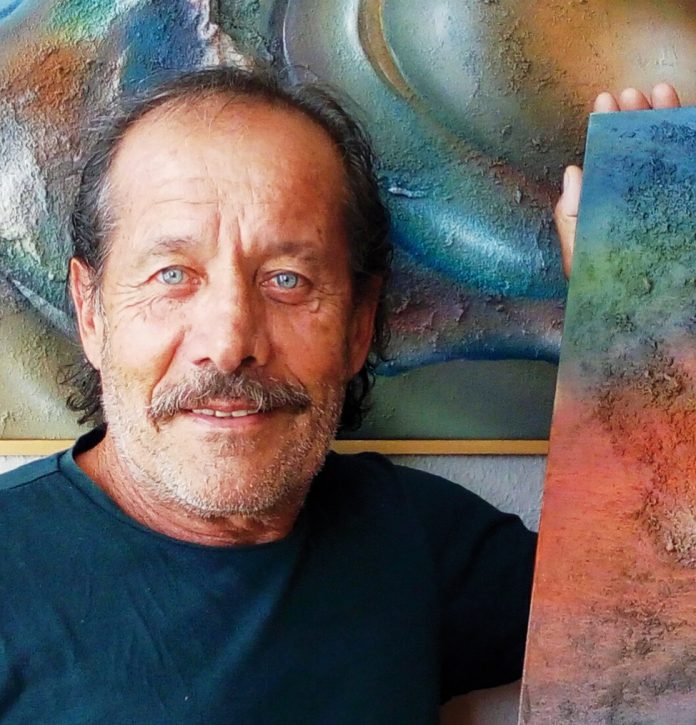 José Melián can’t remember whether he was 12 or 14 when he saw «Montañas del Fuego» for the first time, in Lanzarote. What he’s never forgotten has been the impact the lava and ashes landscape in front of his eyes had on him. That image has been shown later on in his paintings. One part of it is now travelling to Casa Mané, in La Oliva, under the name «Formaciones Oníricas». Through 27 paintings, the artist from Güime portrays his particular vision of this landscape inserted in the national park of Timanfaya.

Melián got to painting almost by chance. When he finished high school, a teacher advised him to enrol in Escuela Pancho Lasso in Arrecife. Maybe that teacher could already see José as a future artist. The young boy listened to him and did it. It was in the mid seventies.
At his dawn in painting he was influenced by surrealism. The young Melián had been fascinated by the paintings by Salvador Dalí, a master of surrealism.
Attracted by the author of «La persistencia de la Memoria» he travelled to Figueres to meet the artist and his work. «I tried meet him, but it was impossible because Dalí was ill», he remembers. However, he could visit the rooms of the painter’s house and museum and get his influence.

Dalí is in José Meilán’s first paintings, but also Lanzarote and its sea. His first pieces of work represent the sea bed but also the surface, the experiences in the sea, the dusk… all of it through surrealist lenses.

Later on his painting got a personal style. In this evolution, the figure of César Manrique appeared, the most international painter from Lanzarote, who this year would have become 100. César and José met in the inauguration of El Almacén, a cultural space that Manrique and Pepe Dámaso opened in Arrecife and that would stir up the island culture with daring proposals that opened Lanzarote to the avant-garde world. Exhibitions by Óscar Domínguez, Jim Dine or Clyfford Still or the first video creation made in The Canary Islands could be watched In its facilities.

Melián remembers that his relationship with César was one of «friend painter». The artist’s particular vision of the volcanic landscape, nature, insects… drew his attention. He also remembers the environmental commitment that the creator of «Jameos del Agua» developed in Lanzarote in full urban and speculative development. «In the beginning people didn’t understand him, but then they paid more attention to him. César was a genius», he insists.

The personal style of José Meilán took him to play with new materials: glues, resins, textures, reliefs… The first exhibition was in the year 1989.
It was the room «Marqués de Herrera», already disappeared, in the village of Teguise, which opened the doors to his particular view of Lanzarote.
Little by little, his work started to be exhibited in galleries and places reserved to art. In 1994 he exhibited in «El Almacén». There he took a series of pieces of work that captured his vision of volcanos, a view from the inside of a volcano, «life within the subsoil», he says.

Volcanos are really present in his work. He assures that «every painter paints depending on where they live» and he again remembers how César Manrique said that «a person who lives in New York paints skyscrapers while a person living in Lanzarote doesn’t paint but volcanos».

In all of this time, José Meilán has carried out about 30 exhibitions, what with individual and collective ones. He can’t remember all of them, but he mentions some of them, like the one in La Palma, in Fundación Mapfre in Gran Canaria, in San Sebastián in The Basque country, or the collective one where he took part with some pieces of work that could be seen in Madrid and Barcelona. He also exhibited in Fuerteventura in the nineties, in a room of the Island council.

Now, José Meilán returns to Fuerteventura with his exhibition «Formaciones oníricas». The author tells how in this painting he captures «memories of my subconsciousness, memories of when I was 12 or 14 and I saw the volcanos of Timanfaya for the first time».

He shows these memories through an interesting chromatic variety where he captures the different conical shapes of volcanos, the igneous and solidified rocks, ashes, craters, volcanic tubes… the exhibition will remain in Centro de Arte Casa Mané, from November 23rd to January 17th. 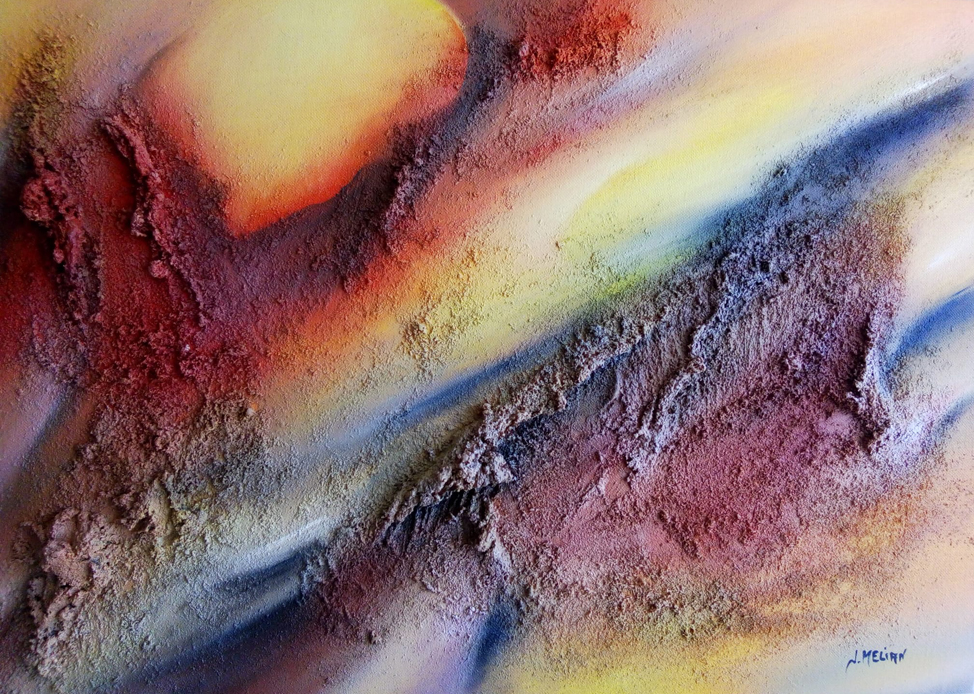 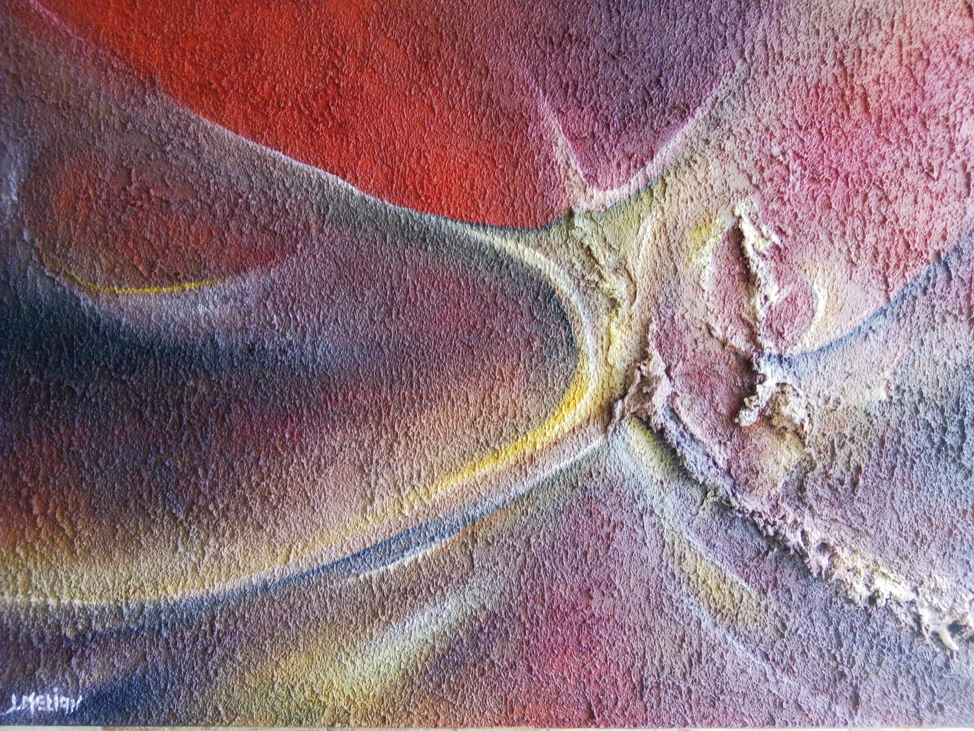 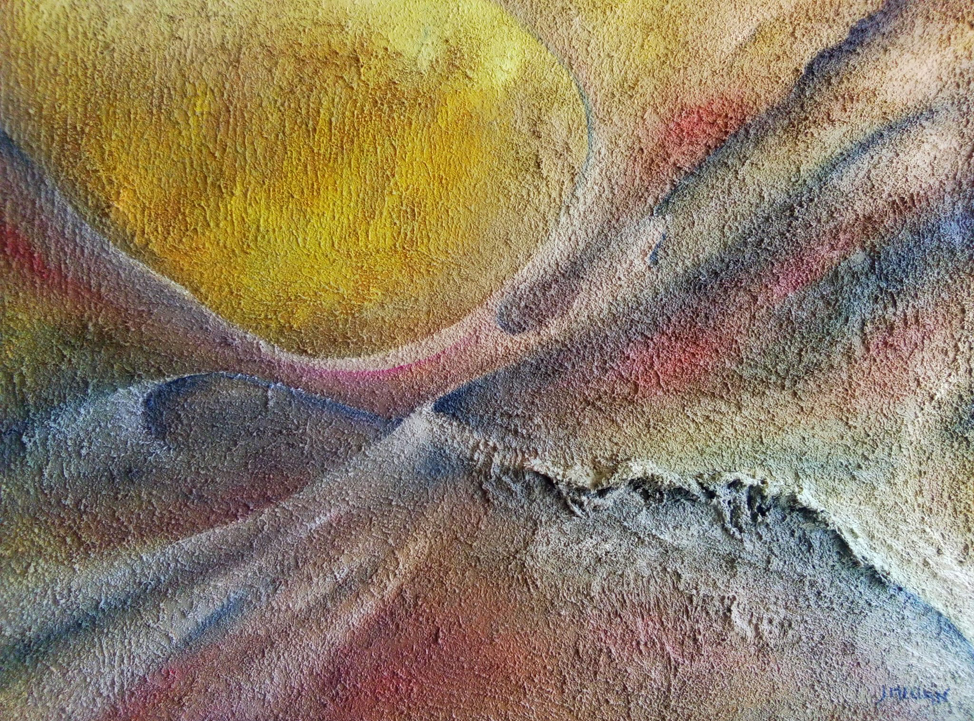