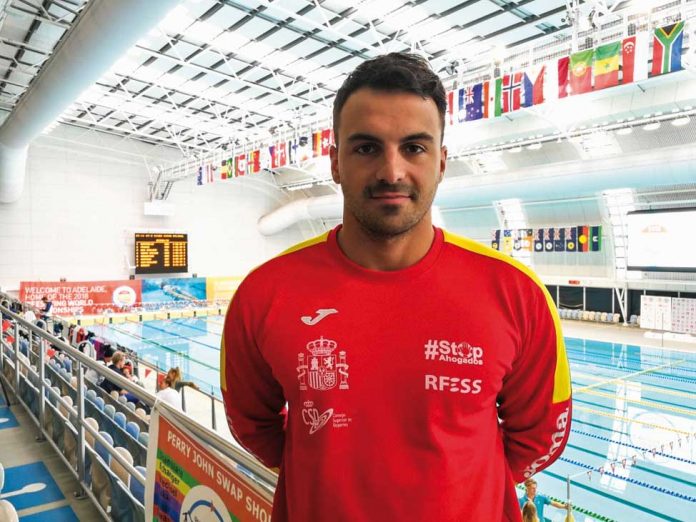 Edu Blasco was born in San Sebastián 24 years ago. When he was four, he moved to Fuerteventura with his family. He learnt to swim and walk almost at the same time. He’s studying Law and he dreams of becoming a politician to achieve as much as possible for the world of sports. Meanwhile he’s been 26 times a champion in Spain at senior level, 43 times a senior medallist in Spain and he’s also broken 33 records in Spain. At an international level he’s been awarded seven bronze medals with the Spanish Team.

How was your start in the world of swimming?
I’ve been related to this world for a long time because my grand-father was a world champion in underwater. At home we’ve always practised sports, competitive sports. I started swimming when I was very young, before becoming two I was already in the water.

What has 2018 been like for Edu Blasco?
As far as competition is concerned, very good, just like 2016 and 2017. I’m quite happy. In 2018 I’ve been a Spanish champion for the fourth year in a row in the senior category, and I’ve also got good marks with the Spanish team. I’ve got the seventh position in underwater, and the eighth one in saving and rescue in Australia, but the second best mark in the world.

You were also in the world championship of Fin-swimming in Belgrade, what was the experience like?
Good. I got there in a complicated way. I had spent the whole year competing. I must point out that in 2017 I took part in three championships. In June I was in the European Championship in Poland; two weeks later, in the World Games, and two months later I was again taking part in European Saving and Rescue Championship.

In 2024 Fin-swimming will be an Olympic discipline, do you intend to take part in those Olympic Games?
I think I mustn’t think of that now; there are many years ahead and I need to keep my feet on the ground because there is where humbleness lies. I’m walking step by step. This isn’t a target for me. If I finish my sport career without having taken part in any Olympic Games I won’t consider it a failure.

How do you face 2019?
It’ll be hard. I haven’t had a rest for three seasons in a row. The Olympics make the entry standards harder to achieve and everything gets more and more difficult. My aim is to go back to the two Spanish teams: Rescue and Saving, and Underwater.
How did you manage to combine your Law studies and being a high-ranking athlete?
It’s impossible to combine. I do my best. The University of Cantabria is supporting me.

How did you get to Saving and Rescue?
I’ve been a good swimmer since I was very young. Since then I’ve stood out in swimming and strength sports. I’m a bit shorter than an Olympic swimmer but I’m also stronger and heavier. I weight 100 kg and I’m 1’85 ms long against the average 1,90 ms. I’m stronger rather than quicker. This is a sport that needs strong implementation in the water. We could say It’s been tailored for me.

And what about Underwater?
This comes from my grand-father on my mother’s side. Recently I’ve found a medal in my grand-fa’s trunk from 1968, Spanish champion in FEDAS, and I also have the one of the 50th anniversary, which I won. I’ve been in this world since I was a child. This Foundation is special to me. I’ve never left it because it reminds me of my grand-fa, and I was lucky not to leave it because now It has become an olympic discipline.

What challenges do you have ahead?
The challenge of the media. All the athletes that aren’t football players have a problem with the media. I’m trying to break that barrier that other Olympic mates haven’t managed to break. My second challenge is what I’m going to do after my sport career. I’m going to redirect my sport education to Merchant Navy and Maritime Saving and Rescue. I’d also love to devote to sports at a political level. I don’t think it’s being managed in the right way. They are giving many excuses claiming that it isn’t profitable, but I think this can be changed. I think I could help swimmers and athletes much more inside than outside policy.

How do you consider the support athletes are getting in the island?
Ridiculous, but in every respect. I think things aren’t working as they should for many reasons. Starting from politicians, who aren’t doing what they should (no funding is reaching us) to social commitment… I think there are people in Fuerteventura that should become aware of this. There are some aspects, sports among them, which aren’t being taken care of, such as having a closed pool. We’ve had first division teams, swimmers in the high-performance centre, winning medals for the Spanish Team, and we’re all away. We worry about grass-roots sport but then we can’t make any of the athletes stay here considering we are the main promoters of the island.

And what about the team?
Fuerteventura is possibly the island with the best athletes considering infrastructure and technical capacity. It’s amazing that, having nothing, we can have so many good athletes away from here in so diverse sports like athletics or swimming.