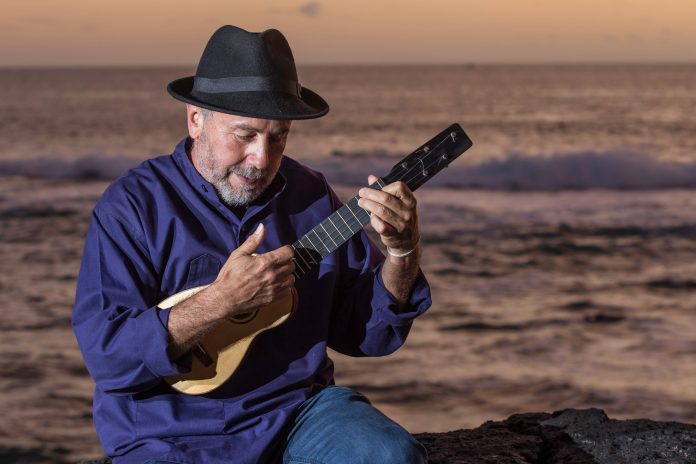 He goes to bed with a project in his head and he wakes up with another one. In his drawer there are records to be released and ideas such as the Museum of the Memory. The most international artist of Fuerteventura, Domingo Rodríguez, El Colorao, has been living as long as he remembers with an instrument in his hands. And also with the commitment of leaving, to those who have to come, an island far from developmentalism and from what limits nature, identity and local history.

El Colorao was born in a family of music players in Tetir, in 1964. As a great-grandson, grandson and son of players, Domingo started to strum instruments such as guitar, bandurria and timple when he still had many centimetres to grow. Once grown up, he did different jobs at the same time: musician in an orchestra, worker for Iberia and music teacher.

One day he managed to organize his agenda and have a week’s holiday. He read on the newspaper about a guitar course in Lanzarote, held by Blas Sánchez and Paris’ guitar consort. He got into a boat and off in Lanzarote. He remembers how that opportunity helped him open «a world I didn’t know existed». His teachers were impressed by how that young man, with no knowledge about music, was able to strum «Recuerdos de la Alhambra» out of his guitar.

In 1985, he was convinced to pack his things and go to Paris to study classic guitar. In the French capital city he got to know the music by the Argentinian guitarist Jorge Cardoso, who was living in Madrid and there he went to study with the Argentinian master. After six years away from the Canary islands, he moved to Tenerife. In the island where Mount Teide is, he participated in a contest of timple, where he made it to the finals with José Antonio Ramos. Together they recorded a vinyl that was left abandoned in a drawer of the Government of the Canary Islands. He packed his things again, this time to go back to his island.

He had been combining guitar and timple for years, till the latter definitively stole his heart. «I thought it was more interesting and more virgin», the musician states. He started to give timple lessons, to record albums, to create shows and to travel around the world as an ambassador of Fuerteventura.

The timple player claims that «unfortunately a lot more could have been done for culture in Fuerteventura». He remembers about those times when a folkloristic school was giving lessons everywhere and there were lots of folkloristic groups and parades. Nowadays, to organize a party, you have to pay for a parade. In his opinion, it’s necessary to «work on folklore, not only by giving lessons, but also by focusing on its origins and tradition, that are our presentation to the world. We could do much more than closing in a place and give lessons».

He states he is a privileged person to have the chance that his job is appreciated in the Canary Islands, but he realizes that Fuerteventura is the place where he plays less. He presented projects in theatres like Pérez Galdós or Cuyás that went sold out. Nevertheless on his island, when he presents them, it almost looks like as if «I’m asking favours».

The musician from Tetir never stops his mind from creating new ideas. He has seven or eight live and studio records already made and waiting to be published, and new projects such as creating a Museum of the Memory in Fuerteventura, where «to show all the cultural wealth of the island».

The project aims at creating a place where people can experience all kinds of singing and see how musicians played guitar, timple or bandurria. It would also include a place where to show the habits and traditions of our elders, such as the ways they used to predict rains, the seeding techniques or cooking methods our grandparents used. «I’ve been interested in this topic since I was a child. I have recorded many hours of music and I want researchers and interested people to have access to them». At this point, the project has not been brought to life yet.

When he doesn’t have a timple in his hands, he defends Fuerteventura. One of his latest battles is saving the dunes of Corralejo. He complaints about their deterioration and loss in capacity, «they used to invade the road before, now this doesn’t happen anymore».

El Colorao is clear, «I’m in favour of closing the road and moving traffic to the upper area. You can enjoy a wonderful environment without using your car. When I go to Mount Teide I don’t park my car on the pick, nor I enter Garajonay or Caldereta de Taburiente with it».

He also takes position against military manoeuvres, the Tindaya project and the fact that the old Puerto Cabras keeps on disappearing due to a building sector driven by development and speculation. He claims it is «very sad that a protection plan for those houses hasn’t been done» and he criticizes the demolition of two old dwellings, right in the centre of the old town, authorized by the City Council of Puerto del Rosario.

«I firmly believe we should hurry up and protect every patrimonial property. Every old house, even if it’s not a medieval castle, has to be protected because it is our history», he says at last. His timple is waiting for him.