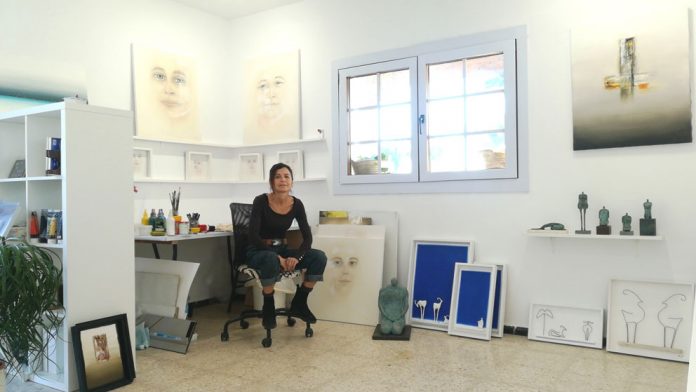 With the arrival of September, The Art Centre Casa Mané starts a new artistic and cultural agenda.

The programme starts with the exhibitions by three resident artists in the island: Greta Chicheri, Nuria del Pino and Verónica Silva. It can be visited from September 7th during the opening times of the centre, from Monday to Friday and from 10h00 to 17h00, and Saturdays, from 10h00 to 14h00m, until January 10th .

WHAT WE’LL SEE FROM SEPTEMBER ONWARDS:

The term is related to the very animal and botanic theme of the work, and the Japanese visual manifestation called Shunga, literally «spring images», where springtime is a euphemism to refer to sexual intercourse. The recognition of the pleasure and the sexual needs of women were and have always been a taboo, even a blasphemy along the history of art. These drawings mean a change of point of view of eroticism, usually associated with a male view. This Galician artist, who has been settled on the island for over a decade now, proposes a series of sketches and a huge skirting board (1,5 for 8 ms) for her exhibition, drawn with pencil on paper.

It’s about two series: one of them more abstract and, the other one, more figurative. The works in «Aires de Isla» recreate imaginary worlds alluding to the island of Fuerteventura, using some elements that make up its landscape. Thanks to the ink on paper, the artist, born in Madrid and living in Fuerteventura from a very early age, has managed to portray the subtlety and lightness looked for to create almost dream landscapes. Nuria is now focused on the technique of ink which allows her to express more precisely the dream state of her landscape and to use new colours like violets and pinks that she’d never used before, contributing vividness and intensity to her works.

This is the first exhibition by the «Colectivo de Tejedoras Subversivas en Fuerteventura». The artistic space of her proposals intends to make their participants consider themselves as a group, with a woman’s voice, so as to empower this collective. Her artistic tools are: fabrics, needles, wool and thread. In this collective there are women of varied professions: teachers, artists, students, designers, journalists, all of them united by their passion for the subversive stitch. An exhibition that presents embroidery as a form of art.

THE ART CENTRE- CASA MANÉ WILL CELEBRATE THE INAUGURATION OF THESE EXHIBITIONS ON SEPTEMBER 14TH AT 17H00, IN AN OPEN ACT THAT CAN BE ATTENDED BY ANYONE WHO WANTS TO.

In November, two new exhibitions will be displayed:

The artist from Lanzarote, José Meilán, approaches us to a very personal style with dream-like paintings taken out of his childhood unconsciousness, watching the volcanic and lava landscape of the island. Most of his works are made with mixed techniques, highlighting relieves and textures. Visitants will be able to enjoy it from November 23rd until mid-January.
On the other hand, the Art Centre Casa Mané, in his bid for talent and for providing an opportunity to emerging artists of different kinds, holds the exhibition by the students of Greta Chicheri: Carole Blenkinsop, Daniela González Pérez, Marina López-Leitón Pedreira, Bili Puig de la Bellacasa, Dominga Rodríguez Rodríguez, Petra Lola Sauer, Fatima Senouci Tani and Francesca Servidio. The display gathers the individual, unique and personal view of every one of them about «virginity», with all the meanings of the term: divinity, chastity, unexplored spots… A true exercise of inner search of thoughts and emotions, likewise virgin for the first time of these aspiring artists.