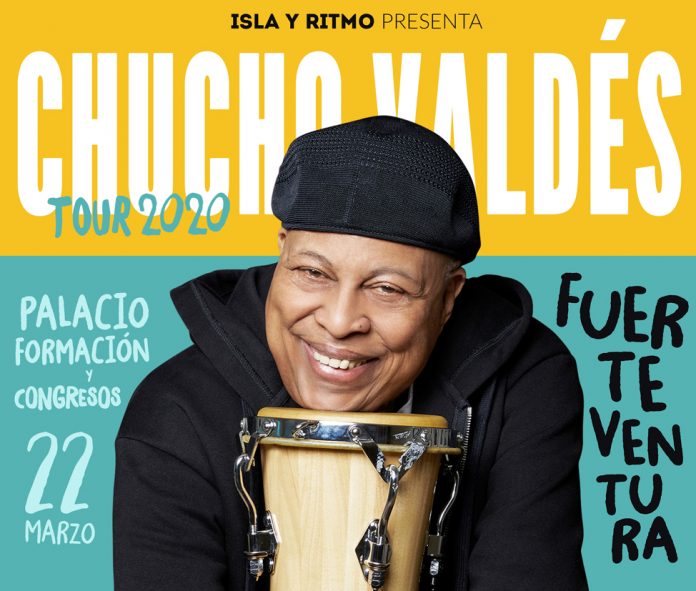 The senior Cuban pianist and composer, Chucho Valdés, will visit Fuerteventura next March 22nd on the occasion of his world tour, presenting his record ‘Jazz Batá 2’. The appointment will be in Palacio de Formación y Congresos, by Asociación Cultural Isla y Ritmo, Producciones Volcánicas and Amusic Production.

«Jazz Batá 2» is a clear commitment to recover what the artist had already presented in 1972: A Jazz triplet with bata drums instead of the habitual percussion. These drums, sand timer-shaped, are traditional in Yoruba or Santeria religions. Themes as «Obatalá», «Ochún» or «100 años de Bebo» complete an exciting concert where the pianist will share his best music with the audience, with a clear commitment to nature and traditions.
We, Canary Island inhabitants, are lucky because his only appointments in Spain will be on March 20th in Teatro Insular Victor Fernández Gopar, El Salinero, in Lanzarote; on March 21st, in Teatro Leal in La Laguna Tenerife; on March 22nd, in Fuerteventura and then another one in Asturias.
Valdés will come accompanied by excellent musicians such as: Dreiser Durruthy in the bata and persucions, Yaroldy Abreu, congas and percussions, and Ramón Vázquez, double bass player. A band that assures the quality and good taste of their performance in a concert that you can’t miss.
Chucho was born in Chivicán in 1941, and his first influence was mambo, which his father himself, also a pianist, used to perform with great quality, together with north American jazz with influences of the rich Cuban folklore. At the age of 16, Valdés was already a pianist in her father’s band.
Getting to know and working under the orders of the popular composer Leo Brouwer in the band of El Teatro Musical de la Habana served Chucho to raise his level of knowledge about harmony, which later on would mark his composition style. In those years, «Chucho Valdés y su combo» appeared; then, in 1967 he was taken on by Armando Romeu to join his Cuban band of modern music; and in 1973, the mythical Irakere turned up, and the fusion was the absolute protagonist, with African percussion, drawings with jazz scales on the piano and guitar
appropriately distorted by wah-wah and fuzz stomp boxes, and some brass horns.
It’s almost impossible to sum up everything this artist has contributed to the world culture; we’re talking about 87 records, 33 official partnerships with other musical projects and 10 Grammy awards in several categories.

Chucho teaches music lessons in Instituto Superior de Arte de la Habana and master classes in universities around the world. Apart from an excellent musician, he’s a man committed to society and the most disadvantaged people.
Since 2006 he’s been a goodwill ambassador of the FAO (United Nations Organisation for food and agriculture) at UN, and every October 16th he holds a concert in La Habana on the occasion of the World Food Day.
The concerts in The Canary Islands are also possible thanks to the island councils of Fuerteventura and Lanzarote, and the townhall of San Cristobal de la Laguna, El Teatro Leal and Jaleo Press Comunicación.

So, you already know. Don’t miss this unique appointment with good music, loaded with amusement and beautiful and interesting messages.

PALACIO DE FORMACIÓN Y CONGRESOS FROM MONDAY TO FRIDAY
FROM 10:00 AM TO 2:00 PM.
ON LINE: WWW.ISLAYRITMO.COM