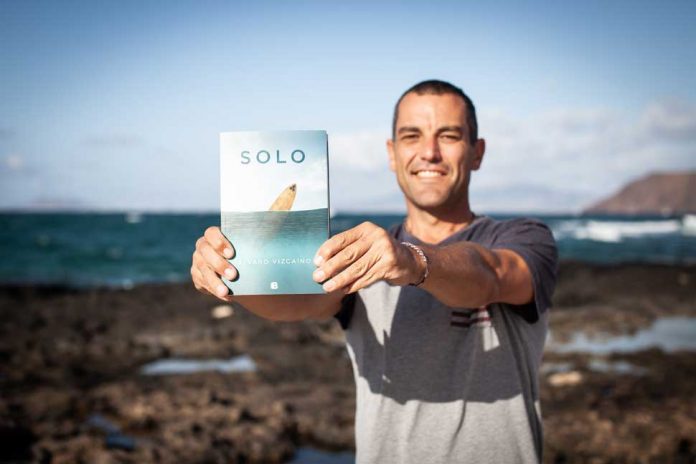 Álvaro Vizcaíno has really succeeded in the world of literature. His first writing managed to catch the attention of Penguin Random House, one of the most important editorials. His first literary creation is called Solo, and there he tells some of his life episodes such as the accident he suffered in 2014, in Punta Paloma, but it’s also a tour around Fuerteventura, its people and its land. In the novel, there are some parts of adventure and introspection, others are funny and entertaining. «writing has been an exploration and a therapeutic need», the author assures.

The film Solo premiered last August 3rd, satisfied about the outcome?
Yes, the film is a view of my experience. It’s the creation of a tailored character with the parts they have chosen for the story.

Why did you decide to write the novel Solo?
The director, Hugo Stuven, used to tell me «what you want to tell doesn’t fit in one film, write a book. I started to write thanks to Hugo. I could see that the film was partial and limited. It had a character I felt identified with in some aspects such as the survival action, which is very realistic, but not in many others and I wanted to tell many more things. That’s why I started to write.

What does Álvaro Vizcaino tell in this novel?
In the novel I tell about two and a half years of this character’s life. The character of Álvaro has a life in the city which doesn’t satisfy him. A friend from Fuerteventura calls him and proposes him to set up a business. Álvaro decides to come and start up. He recovers its contact with surfing, discovers the island and starts meeting most varied characters.

What kind of characters can we find in Solo?
There are very interesting characters such as Woolfgang, the crazy anthropologist. Hans Klaar, the last free man, as I call him, who appeared in the island on his ship and crosses the oceans on a catamaran, made by himself, Polynesian style. He’s a Swiss guy who has been living on a ship since he was eight.
There are also local characters like Nelo, some others from Corralejo. There’s a bit of everything.

What’s the function of these characters in the novel?
Each one contributes something. There is a part of surf discovery with some of them. Surf as something alive, a passion and a way of life, also as a challenge. Some others find out the old mysticism of the island, like Woolfgang, the crazy anthropologist, through whom I get in touch with ancient times in this island and several girls who represent the feminine side.

«IN THE BOOK, THE ISLAND IS A CHARACTER THAT STANDS IN FOR A BUBBLE IN THE WORLD»

The sea is another character in the novel…
The sea is something which attracts. A continuous temptation. It represents the subconsciousness. There is a lot of «sailing» outside and inside. There are many analogies between the inner and outer sea as a way of diving in the subconsciousness. It’s also fun for surfing, but a challenge as well.

How is Fuerteventura island portrayed in the novel?
The island is a character that stands in for a bubble in the world for the character of Álvaro. It’s a place of volunteer or compulsory exile, of self-discovery. It’s a chance of contact with nature and self-discovery.
A concrete part of the book is about the accident you were in, in Punta Paloma…
The accident is the outcome. Solo is a story, that of Álvaro, based on my own life. The development is understood through the accident. The accident is completely autobiographic, just as I remember it. A transcription of what I experienced and felt.

What authors have influenced you when it came to writing this novel?
The one I’ve always admired has been Henry Miller. I think there is something that reminds of him in my writing, modestly speaking. That part of everyday life, wise and wrong choices, introspection. realism and crudity, and also idealism and non-stop search.

How did you manage to get Penguin Random House, one of the most important editorials, to accept your manuscript?
I sent the draft as a cold call to all the editorials. One of them said: «Hello, we’ll read it» and oddly enough Penguin said: «Can you give us a week?». Then they said: «We have read over 15 pages». I couldn’t understand that was like a codded message. Then they said: «we like it a lot and can publish it». They said: «the story has a strong potential and we really like it»

What was writing it like?
I started to write it when I still lived in Barcelona. It was then that the film Solo started to sprout. Then I went on a trip to Thailand for some months and oddly enough I met a Swiss guy. I went on board of his ship and I was sailing around the islands and started to write then. Later on I came to Fuerteventura and I kept writing and finished it here.

What projects are you involved in right now?
I’ve been training myself in Transpersonal Psychology and Coaching to be able to give a name to many traits. I noticed people liked this. I started to work with adolescents as a volunteer. I`ve realised there’s a message close to each one of us, and this is the fear to do things. I’m devoted to giving speeches. Companies are calling me and I’m doing it professionally, but I still do it as a volunteer as well. That fulfils me.

And what about writing projects?
I’d love to write about Hans’ life, the nomad sailor.