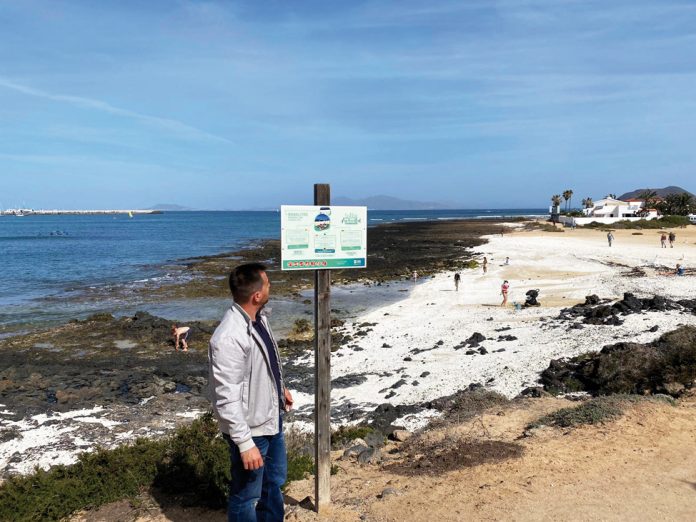 Littering anywhere, burying fag-ends in the sand, taking stones and pieces of nature home, spoiling the landscape with motor vehicles, engraving and making graffities…. Are there people who don’t think this is non-sense? It seems there are, and this is why the Department of Environment in the Townhall of La Oliva, within the initiative «La oliva, Actitud Ambiental», which is getting to all the corners of this municipality, is posting information signs in three languages with the aim of preventing some of the most harmful practices that rally against the integrity and preservation of the landscape, biodiversity and natural environment. 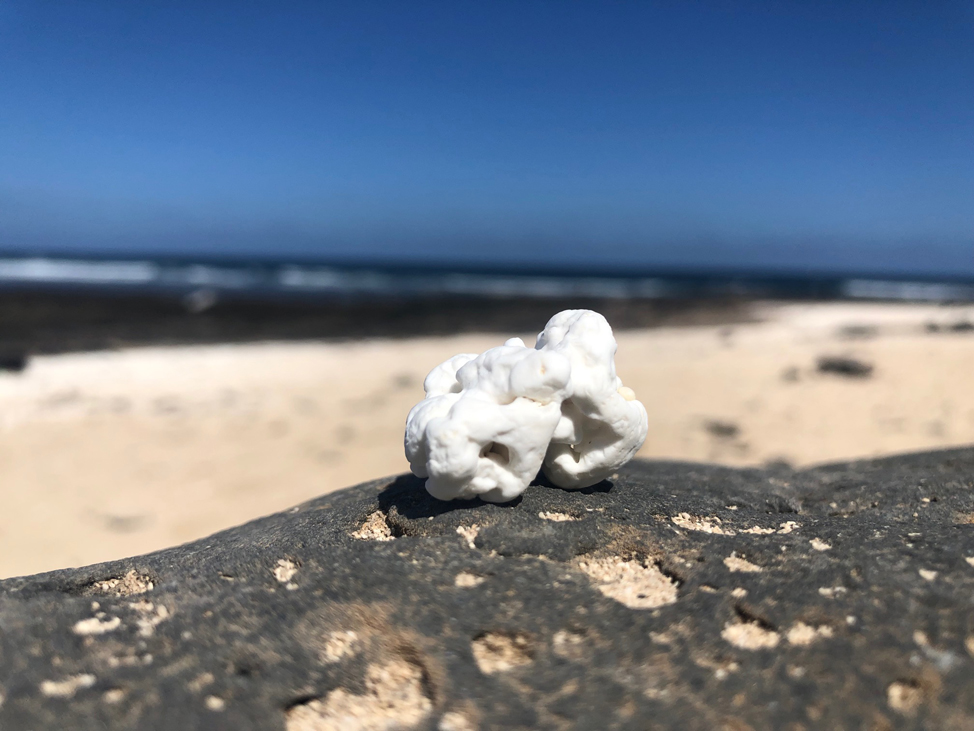 Some two years ago, an «instagramer», visitor of Fuerteventura, uploaded a picture of «Playa del Hierro» in the social nets, with the hashtag #PopCornBeach.
Probably he wasn’t aware of the serious harm he was about to bring about… The publication spread quickly, thousands of people followed this unfortunate illustration and the consequence’s been is horrifying: now the’re more rhodoliths in Instagram than on the beach.
But what are rhodoliths and why are they so important? To begin with, any element in nature is essential where it is. It always plays a role and disrupting it in any way destroys the environment and biodiversity. In the case of rhodoliths, they are, in few words, the sand of tomorrow’s beaches. Beaches that won’t exist if we don’t leave them where they are.
Would you like to get more details? They’re made of seaweed that gathers around a small stone and it forms a little ball. This process takes place between Fuerteventura and Lanzarote, away from the coast, and between twenty and thirty metres deep.
Then these balls are taken to the coast by marine currents and they make up the interesting landscape of these beaches of white and shiny balls that, when fragmented by sea and wind erosion they turn into sand on our beaches, a very white, special and characteristic sand of our area. All this very long process of nature should never end up inside the vase of a home.
Environmental boards, set up in several areas of the coast affected by this issue, try to make visitors aware of the importance of leaving the landscape as it is, but if environmental awareness doesn’t work they’re also warned that any item taken out of the landscape will be confiscated in the airport and they can also be fined. Let’s see if they learn this way.

Engravings and other eccentricities

Not to litter anywhere, not to drive vehicles outside the tracks… may seem a very logical premise but there’re still many people who seem not to realise the terrible harm they’re causing to nature by not respecting such easy rules.
Let alone the eccentricity of making engravings, graffities or drawings on the rocks. The case of the ravine of Jable is one of the most alarming ones in this respect as it’s made up of sand – hence its name, «Jable» – which turns it into a work of nature of extreme sensitivity. If anyone believes that by engraving their name on the sides of the ravine, they’re leaving their print for the future, be aware that this isn’t the case; in a future, and a near one, the ravine won’t exist if we don’t stop doing silly things.
The structure of the ravine is made of sand whose external layer’s been solidified over many years, a layer that’s acted as protection of that impressive landscape. If it’s destroyed there’ll be further erosion in the inner layers of loose sand and…. Goodbye to this wonder of nature.

The surroundings of El Tostón Lighthouse, in El Cotillo, are the stage of another most harmful practice to the environmental balance: making stone cairns
These small stone heaps don’t only spoil and make the landscape ugly but they mean an attack to the natural environment. Stones play an important role in the environment; they contribute to prevent the wind erosion and are the shelter of animal and botanical species, reason why making these piles, moving them or altering them in any way causes habitat disturbance.
And for those who don’t know that stones must be left where they are out of common sense, information boards have also been set up to educate and report on it.

The townhall in La Oliva is proving the important and necessary environmental attitude, as well as many neighbours in the north of the island who are making their bit to make the whole world aware of the values of respect and care of nature… but there’s still a long way to go. Not until environmental awareness reaches every single person inhabiting or visiting our paradise will it be out of danger.