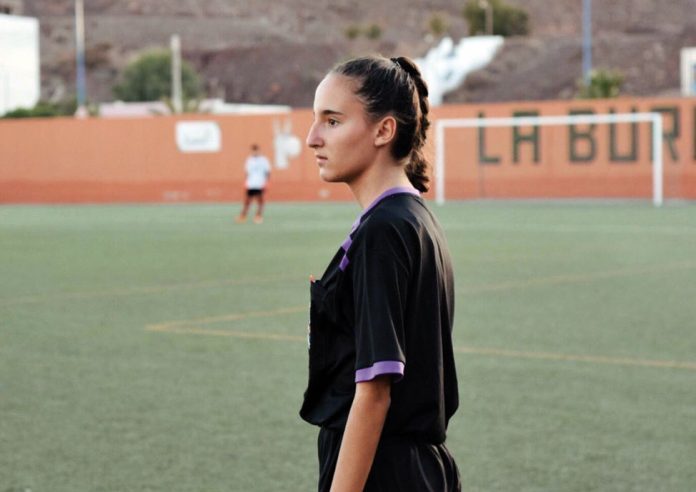 GABRIELLA RODRÍGUEZ ROMERO IS JUST 16. SHE GREW UP WITH THE SOUND OF FOOTBALL IN THE BACKGROUND AND DEBATES ABOUT WHETHER THAT WAS A PENALTY OR NOT, BUT SHE HAD NEVER KICKED A BALL. ONE DAY, FEMINISM CAME TO HER LIFE, AND SO DID THE POSSIBILITY OF BECOMING A REFEREE. NOWADAYS, FEMINISM RUNS IN HER VEINS AND SHE’S ONE OF THE ONLY TWO REFEREE WOMEN IN FUERTEVENTURA.

This young girl is studying now to pass the first year of post compulsory education. She’s chosen humanities. Once she’s passed the second year she’ll go to university. She is positive she’ll study a double degree programme i social education and work. She also wants to become a referee and being recognised for succeeding in a world that, though in the XXI century, keeps being led by men.
Gabriela reached the world of refereeing by chance. A neighbour of hers joined it and she got bitten by the bug. She’d never played football before but she grew up in a home where football ran. Also, for some time, she’d got used to watching her friends playing football: «I went to see matches and listened to the comments of the audience towards referees, such as you don’t know about football. This is why I felt like joining them», she says.
Her mother and herself started to look for and into the referee training course. When she had everything she enrolled. She was 15 and she still didn’t know she would become one of the first women to distribute justice in the football pitches in Fuerteventura.
This is the second season as a referee and, although her carnet reads she can referee in the junior category, up to now she only does it for children. Her dream is to become a ronowned referee. She’d like to be like Stéphanie Frappart, the first woman who whistled in a male final of the UEFA supercup.
In her short career as a referee, Gabriella admits she has lived moments of discouragement due to «nasty comments towards referees», but she has learnt to put up with them. She hasn’t suffered male chauvinist comments while whistling a match, but she has had to stand comments from some mates in high school such us:«the pitch is just for you to wash it».Gabriella’s answer is clear: «they’re stupid people».
Among her memories, Gabriella remembers a match where she whistled an off-side. The coach of the team told her she was wrong and he got mad: «he called me every name under the sun and said I didn’t know what an off-side was. However recently a senior coach congratulated me on whistling an off-side very well». This gesture filled her with self-confidence. Every day that passes by, Gabriella learns something new about her colleague referees in Fuerteventura.
The referee committee assures they haven’t had any male chauvinist issues. Neither have they had any on the football pitch. The young children she works with are sometimes surprised to see a woman refereeing a match «but they have never showed lack of respect for being a woman; however, other colleague referees have showed quite a lot of them»
According to Gabriella, the solution is «not to listen to those comments, as if we did we couldn’t go on refereeing any other match. There are people telling us off, but they’ve never fought what I have in order to get my title»

Gabriella got to feminism hand in hand with Ore Vera, a language and literature teacher outstanding for her feminist activism. Ore, together with a group of students, created La Sexta Cariátide, a feminist association from the IES San Diego in Alcalá, a pioneer in this field in educative centres in Fuerteventura and renowned for her work with the Meninas Prize awarded to all the government delegations in Spain in recognition of values such as equality, peace or feminism.
«With Ore I found out I had always had a feminist at home. That feminist was my mother and I had never considered her as such. I started to discuss with her and I realised that the world wasn’t as men saw it», she says.
Sitting on a bench in Puerto del Rosario, Gabriella remembers her start in La Sexta Cariátide. «It was a very nice period, I became aware of many things». «Ore made me realise that I’d always been a feminist, but I had never noticed».
Gabriella insists that people must stop thinking that feminism tries to denigrate men. What it really looks for is equality. Feminism is equality, and in order to reach it certain points must be respected».
This young sixteen-year-old girl admits that some high school students usually make male chauvinist comments. It doesn’t happen the same in the referee committee, where all the members except for her and Candela Martín, the other referee woman in Fuerteventura, are men. Candela Martín is also a delegate. «Men respect us a lot. Nowadays I can see more male chauvinism among people my age than among elder people, but maybe it’s also because I live together with boys my age», she says.
Gabriella’s dream is to be able to referee important matches. The day she succeeds she will thank her mother for having always trusted her. She also thanks the technical committee of referees because «they really believe in me and Candela Martín. I want to get far so they applaud me and say hurrah what Gabriella, from Fuerteventura, has achieved».